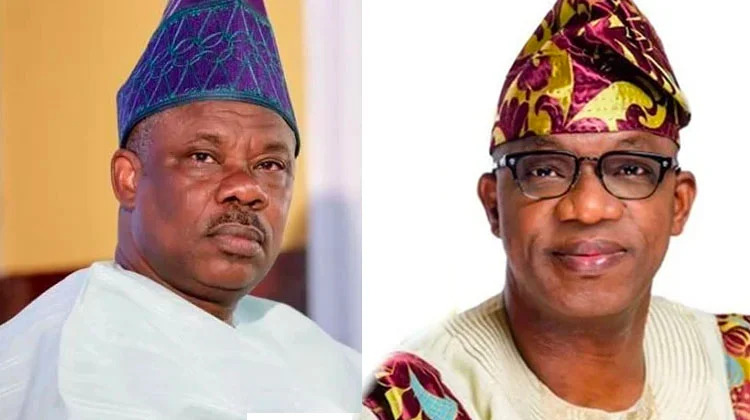 Ogun State governor, Dapo Abiodun and his predecessor, Senator Ibikunle Amosun, have clashed over the governor’s alleged criminal records in the United States.

Abiodun and Amosun have been battling for the control of the All Progressives Congress (APC) in the state.

A petition submitted to the national secretariat of the APC had sought Abiodun’s disqualification from the party’s governorship primaries over fraud allegations.

A member of the party in the state, Ayodele Oludiran, had in the April 12 petition alleged that the governor had been accused of ‘concealing criminal offenses he allegedly committed in the USA in the 1980s’.

Oludiran insisted that Abiodun’s candidacy would portend danger for the APC with the damning allegations against him.

However, documents allegedly featuring the mugshot of Abiodun and his purported court conviction for criminal offences which bordered on credit card fraud, petty theft, and forgery surfaced online on Monday.

Reacting to the allegations, Dapo Abiodun Campaign Organisation (DACA) accused Amosun of sponsoring a smear campaign to malign the governor.

The group in the statement, in Abeokuta on Tuesday by the spokesman of APC, Tunde Oladunjoye, accused Senator Amosun and his loyalists of fabricating ‘malicious, unfounded and totally false allegations to incriminate the governor and present him as one who is ineligible to contest the high office he’s occupying’.

But, Amosun in a statement by his media aide, Bola Adeyemi, described the allegations as ‘wild and callous’.

He implored Abiodun to employ every legal means to bring whoever is involved in any ‘smear campaign’ against him to book.