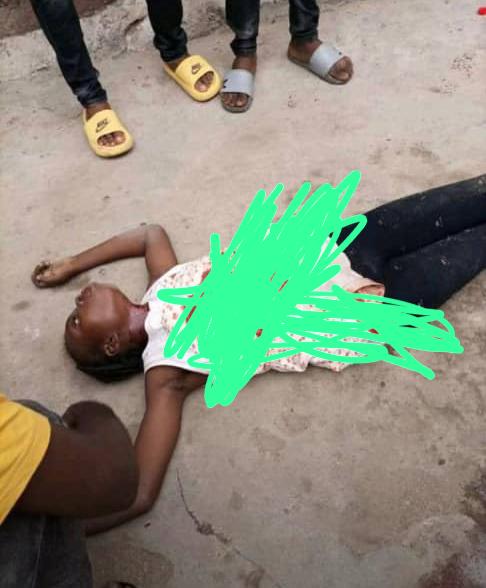 A 14-year-old girl, simply identified as Jumoke, was on Saturday allegedly killed by a stray bullet during a  clash between security agents and the  Oodua Republic agitators in Ojota, Lagos.

However,  the Police Public Relations Officer (PPRO) of the Poluce Command  in the state, CSP Olumuyiwa Adejobi, denied the report in a statement, saying the Police “did not fire a single live bullet at Ojota rally today”.

An  eye witness told the News Agency of Nigeria (NAN) that the body of the girl was found in front of No. 428, Ikorodu Road, close to Ojota Motor Park.

A woman, Miss Tosin Oyemade, who claimed that the deceased was her salesgirl, said that she had sent her to go and open her shop while she (Oyemade) went to church for an event.

“I asked her this morning to go and open the shop while I went to  church for an event, planning to join her later.

“My cousin called me while in church that the Police had killed Jumoke; I quickly rushed down only to see her dead body in the pool of her blood.

“I was told that  while the Police were shooting, that people started running toward the compound (No. 428, Ikorodu Road) where Jumoke fell down bleeding,’’ she said.

Another eye witness, one Mr Julius Onaguruwa, told NAN that he was among those running into the compound when the girl fell and started  bleeding from the chest.

Meanwhile, the Police spokesman, CSP Adejobi,  said in a statement that the Police did not kill the young girl.

“The attention of the Lagos State Police Command has been drawn to a news making  the rounds that a 14-year-old girl was hit and killed by police bullet today,  July 3, at the venue of the Oodua Republic Mega Rally in Ojota, Lagos.

“The command hereby wishes to debunk the rumour and state categorically that it is a calculated attempt to create confusion and fears in the minds of the good people of Lagos State and the country at large.

“The command did not fire a single live bullet at Ojota rally today.

“The said corpse was found wrapped and abandoned at a distance, far from Ojota venue of the rally, behind MRS Filling Station, inward Maryland, on the other side of the venue, with dried blood stains suggesting that the corpse is not fresh,’’ Adejobi said.

NAN reports that Oodua Republic agitators came individually to the front of Gani Fawehinmi Park, moving around with no sign on them as protesters.

While the Commissioner of Police in Lagos, Mr Hakeem Odumosu, was briefing journalists at the venue, the agitators began to bring out fliers, banners and putting on T-Shirts with Sunday Igboho picture printed on them.

The CP, however, appealed to them to be civil, warning, that the group did not notify the Police of their  planned protest and that, therefore, the rally could not hold.

NAN further observed that while they were becoming stronger and chanting the Oodua Republic songs, the Police started using water canon to disperse them.

The police also used teargas  to disperse the gathering crowd, including journalists.

The agitators, comprising men and women, ran toward Ikorodu axis for  safety.

Meanwhile, unconfirmed sources close to the Police said that  five persons who  were arrested at the venue were taken away in a vehicle belonging to the Rapid Response Squad (RRS). (NAN)