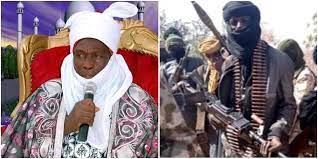 The abducted Emir of Kajuru in Kaduna State, Alhassan Adamu, has regained his freedom from his captors.

The emir was abducted alongside 13 of his family members and aides in the early hours of Sunday.

The police said he was kidnapped from his palace in Kajuru, Kajuru Local Government Area of the state around 2.34am on Sunday.

A former Chairman of the Kaduna Council of the Nigeria Union of journalists, Alhaji Ibrahim Kajuru, told journalists in the state capital on Monday of the monarch’s release.

He, however, said other members of the family were still being held by the kidnappers and refused to comment further on the incident.

According to him, the 85-year-old emir has since been taken to the hospital for medical attention.

The kidnappers had earlier demanded N200m before the captives could regain their freedom.

The emir was abducted alongside his three wives, grandchildren and palace aides.

A source told our correspondent that the bandits had reached out to the emirate council about the ransom, adding that negotiations were ongoing.