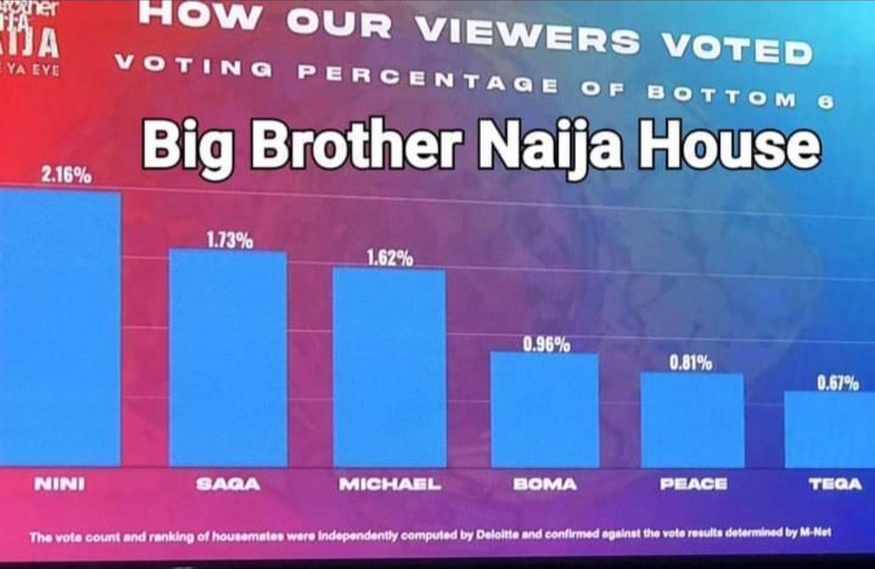 Organisers of BBNaija had announced that Sunday’s eviction will be a ‘Kingsize’ eviction and she was nominated for possible eviction with fourteen other housemates.

Following her eviction, Micheal Chukwuebuka and Peace Ogor were also evicted from the show

Michael, had won a sum of N2.5m and an all-expense paid trip to One Africa Music Fest in Dubai by gaining the highest points in a Pepsi task.

Peace emerged first runner up earning her N1.5m and an all-expense paid trip to One Africa Music Fest in Dubai.

The last housemate evicted from the show was Boma. Recall that Boma and Tega had recently sent tongues wagging when a video of the duo kissing and being sexually intimate went viral.

When Ebuka asked Tega about her situationship with Boma she stated that they were just acting.

“Boma is my Friend, Boma and I were just playing a script, we are great actors. My husband is a bad guy, he will understand” she said.

Nini, Angel, and Pere were declared safe. Ayra starr and Rema were brought on the show to peform

See how the viewers voted below