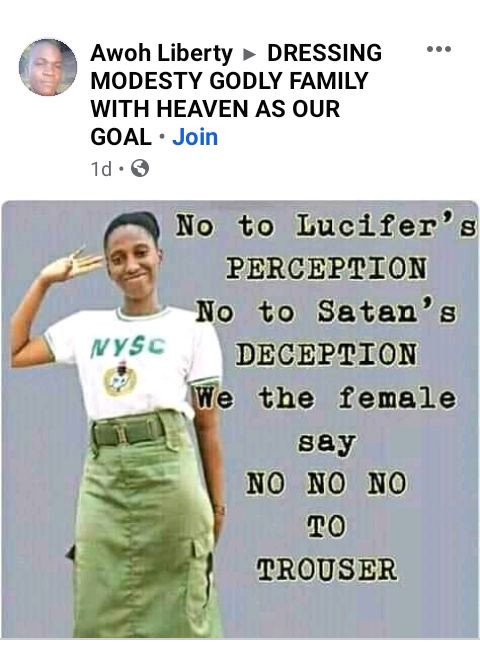 A deeper Life Church member, Awoh Liberty, was the trolled on Facebook after he went about posting a photo of a female Corps member wearing a skirt instead of the trousers stipulated and issued by the NYSC.

The photo which he posted on various Christian Facebook groups on Sunday, reads: No to Lucifer’s Perception. No to Satan’s Deception. We the female say no no no to trouser.”

The post caused different mixed reactions on the groups with few in support while many argued that it would be very difficult to engage in physical activities in orientation camps while wearing skirts.

“This uniform is an occupational clothing na, all things are lawful but not all are expedient na. Wear the trouser, you never commit sin. Dont be like the unbelievers who are not enlightened”

Toochukwu Ben Anefo, wrote: Dear poster I put it to you that you are using the time you would have used to preach salvation, the love of Christ, righteousness to advertise frivolities. Wearing trousers or skirt is not the way to eternity with God. Only Jesus. Preach him alone and allow the Holy spirit to do his work. Shalom.”