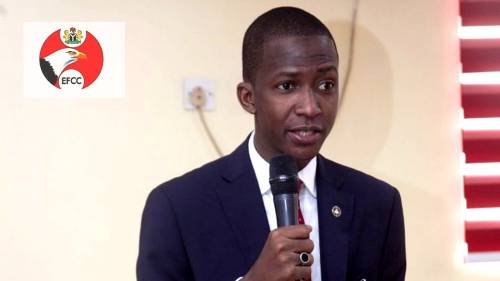 The Chairman of the Economic and Financial Crimes Commission, Abdulrasheed Bawa, on Thursday, said Nigerians will know the identities of terrorism financiers in the country at the right time.

Bawa, on Thursday as a guest on Channels Television’s ‘Politics Today’ current affairs programme stated that he can’t expose the financier of terrorism in the country publicly.

The chairman had collapsed during an official function at the Aso Rock Villa earlier on Thursday, also said he had seen his doctor. “The doctors confirmed to me that everything about me was okay except that I was a bit dehydrated and need to take a lot of water.” He said

United Arab Emirates authorities in the course of the week identified six Nigerians as financiers of terrorism.

The Chairman of the Economic and Financial Crimes, Abdulrasheed Bawa, on Thursday stated that he can’t expose the financier of terrorism in the country publicly

Meanwhile, the EFCC boss when asked about sponsoring terrorism in the country on Channels TV on Thursday evening, said he can’t discuss a sensitive national security issue on national television.

Bawa asked, “If you are my adviser will you advise me to come on national television to tell the whole world regarding matters of sensitive national security issue?

“Certainly, not. But what I want to assure you is we are working tirelessly with other sister agencies to ensure that this country is free of terrorism.”

Meanwhile President Muhammadu Buhari administration had vowed to release the names of that financing terrorism in the country but has failed to fulfil its promise.