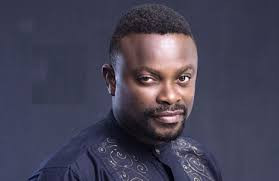 Actor Bishop Umoh a.k.a Okon Lagos has lashed out at online fraudsters popularly known as yahoo boys and corrupt politicians over their activities.

Okon Lagos also asked yahoo boys on his list to unfollow him again as they are of no importance, because the super rich people are beyond their reach.

He stated that these online fraudsters steal from the poor, lower and upper middle class, and push them to contemplate or commit suicide.

Speaking about corrupt politicians, the actor accused them of stealing the collective commonwealth of the poor people they were elected or appointed to lead and provide for. Okon Lagos further prayed that the days of these corrupt politicians turn out dark, short, slippery and thorny.

He wrote;
Also to ALL the corrupt politicians who STEAL the collective commonwealth of the poor people they were elected or appointed lead and provide for, may ALL your days be DARK and SHORT and your paths, SLIPPERY and THORNY! And may the congregation Answer Amen!

This isn’t the first time Okon will be calling out Yahoo boys. Just last month, he asked internet fraudsters who might be following him on social media to unfollow him as he hates them unapologetically.