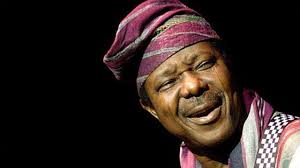 Juju legend King Sunday ‘Sunny Ade’ Adegeye might not be celebrating his 74th birthday tomorrow following the death of one of his wives, Hon Risikat Adegeye.

The late Risikat Adegeye, an ex-member of the Lagos House of Assembly, died in the early hours of Tuesday.

However the circumstances surrounding the late Adegeye’s death is still not clear.

The deceased was a two-time member of the Assembly Service Commission.

According to Leadership, the ex-lawmaker died of cancer.

The ‘Juju’ king has a total of seven wives.

KSA was yet to release a statement since the incident happened.