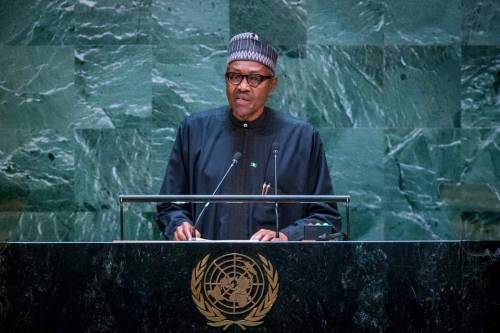 The Minority Caucus in the House of Representatives has flayed the speech delivered by President Muhammadu Buhari at the 76th session of the United Nations General Assembly (UNGA) in New York, United States.

A statement signed by the minority leader of the House of Representatives, Ndudi Elumelu, said the speech was a great disservice to Nigeria by failing to present the true picture of affairs in Nigeria.

Elumelu highlighted cases of human rights abuses, undemocratic governance, injustice, insecurity among other menace ravaging the country which the President ought to have made mention of.

He took a swipe at the President for making claims of building “isolation centers and emergency hospital wards, all over the country in record time” in the fight against COVID-19 which was in fact, a lie.

The minority leader pointed out that Buhari’s speech conveyed no personal commitments that   could guarantee an end to poor and undemocratic governance neither did it portray a decisive roadmap towards economic recovery.

The statement read, “The Minority Caucus in the House of Representatives has extensively reviewed the address presented by President Muhammadu Buhari at the 76th session of the United Nations General Assembly (UNGA).

Our caucus holds that President Buhari’s speech is a great disservice to our nation by not presenting the true picture of affairs in our country; the human rights violations, corruption and incompetence in his administration; the excruciating hardship, escalated insecurity, national divisiveness and infrastructural decay under his watch, thereby blocking avenues for desired intervention in our various ailing sectors.

“The Minority caucus was alarmed by President Buhari’s report to UNGA that terrorists have been so weakened in Nigeria that they are now preying on soft targets, when in reality, insurgents have become so emboldened under his watch, that they are now attacking military formations, kidnapping and killing our gallant officers while overrunning communities and murdering our citizens without restrain.

“As representatives of the people, the Minority caucus is depressed that President Buhari’s speech did not reflect on the kidnapping and killing of students and school children in Nigeria.

“The speech did not reflect on the closure of schools and crippling of education in many parts of our country, where normal life has been destroyed by terrorists, neither did it show any empathy towards the victims of terrorism attacks

“Our caucus is worried that in reflecting on violent conflicts, Mr. President’s address conveyed no personal commitments that can guarantee an end to poor and undemocratic governance, human rights abuses, poverty, ignorance, injustice and inequalities, that are prevalent under his watch, even after identifying such as the causes of conflicts.

“Also, the minority caucus is shocked by the claims in Mr. President’s speech that his administration “built” isolation centres and emergency hospital wards, “all over the country” “in record time” in the fight against Covid-19; a claim that is in conflict with the infrastructural reality in the country.

“The Minority caucus, after due consideration, urges President Buhari to always cross-check the content given to him by his handlers so as to ensure that his position, especially on the world stage, captures the reality as well as aspiration prevalent in the country.

“This is because such addresses ought to serve as unblemished working document for interventions and solutions at various levels of governance.”