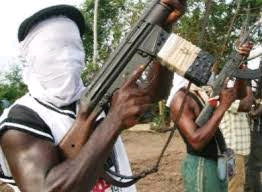 Alex Arthur A Rivers state based businessman, has narrated how a boy he fed and clothed sent a gang to kidnap him.

In an interview with The Nation, the man said ;

“There is a boy I used to know in my former place of residence. His name is Golden aka Sugar Gold. I met him early last year. He was looking unkempt, although he was old enough to take care of himself.

I was helping, clothing, him. I fed him sometimes, showing him love even though he wasn’t related to me. But he was the one, who arranged a gang of criminals to kidnap me.”

“I alighted from my car to open my gate at Iwofe area, two guys approached me. One of them showed me an ID card claiming to be a naval officer and he called my name first, my phone number,  my local government area. He called out all my personal information.

The other person brought out a gun and asked me to go to the back seat of my car while the other one took charge of my driver’s seat.

They drove out of my street and we headed for D/line, where the one driving went into an office, collected some documents and drove to the bank where he performed some transactions.”

“From there, they drove me down to an unknown area in Oyigbo axis, where they kept me briefly and demanded a ransom of N1.5million. After the negotiations, they said I didn’t come up with a reasonable amount of money. They drove me back to my house in Port Harcourt, where they made away with my television set, emptied my fridge, turned my room inside out.

They left with the things they collected, which are my car, phone, television set, N128,000, and a huge sum of money from my car and headset.

They brought me back the same day. They dropped me at my junction and zoomed off. I think they felt it would be an inconvenience for them to keep me captive. Moreover, they were just two guys.

I was scared for my life. They had a six-round loaded pistol pointed to my waist. They threatened to kill me. Those guys are heartless and wicked.”

He said the two-man gang members were later tracked with the aid of his stolen phone and arrested by the police. He said they confessed that Sugar Gold sent them to kidnap me.

“I felt heartbroken that someone I was assisting to get on his feet turned around to kill me. His people have been begging me to forgive him. I have forgiven him but he needs to suffer the consequences of his action.”