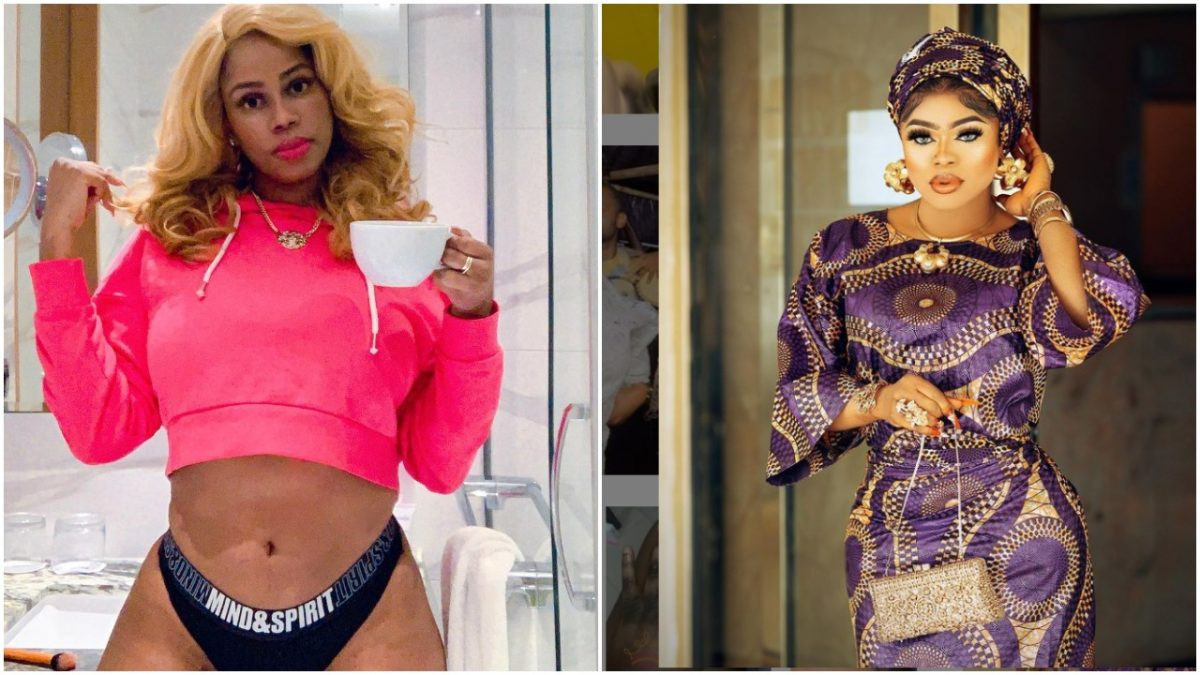 Singer Daffy Blanco has slammed cross-dresser, Bobrisky after he denied knowing her.

Daffy claimed that she and Bobrisky used to be friends, and then spilled unverified secrets about Bobrisky and Mompha, alleging that everything Bobrisky’s former PA,  Oye Kyme, said is true. However, Bobrisky denied ever meeting and knowing her.

The cross-dresser’s claim was however found to be untrue as an old video of him and the London-based singer hanging out surfaced.

Serving a response to this, Daffy Blanco said Bobrisky is claiming not to know her even though he begged her to buy his cream and allegedly came to her hotel and ordered a take away.

Also recounting how a “billionaire” who owns a bank warned her about Bobrisky, she disclosed that she never listened because she thought he was sweet. She also alleged that the crossdresser lives a fake life, as he came to her hotel with an Uber while claiming to have a driver.

Countering reports of being an Instagram prostitute as claimed by Bobrisky, Daffy alleged that the cross-dresser has always been hungry for fame and wouldn’t be anything without Tonto Dikeh.

Warning other women to be careful of Bobrisky, she added that he will always be a “man with fake bum pads with smell of sh!t”.

“I will address by your real gender !!!! Guy listen Bobrisky or what ever you call urself… Don’t you ever dare act like I was ur fan I just liked you and how you handled haters coming out as a gay in Country where it’s illegal is no joke. Guess you still alive in the name of Amnesty international and pitty !!!So funny you saying you don’t know me but you were begging me to buy ur cream,Same person that came to my hotel and even ordered take away.

Do you remember my billionaire ? He owns a bank he warned me about you then and I never listen cause I thought you were sweet .Your life is so fake even then you came with uber and you said you have driver.You posted girls coming for ur birthday saying they ur best friend why you never post them again ? Cause you fight with everyone and expose secrets,You call me Instagram prostitute me that’s posts once a year God punish you.

I don’t make money of Instagram,I never even shaked my ass here, I have euros not Niara !!Sell ur leaking Ass in peace bro.Do you Remeber how you embarrassed me outside Eko hotel when the media house approached us ?? You always been hungry for fame but you doing it in the wrong way.If not for Tonto you would still be a nobody.All you know is to shout and scream and insult, which one again ? Shameless fool .

You have followers cause people are curious what kind of animal you will revolve into. Any female you make friends with should be careful of you jealous bastard!!!! Las las you will always be a man with ur fake bum pads with smell of shit how far with that ur surgery you did in Dominican republic of yaba.Be careful who fight with one day nah one day. Done!!! ”

She also paid back Bobrisky and leaked his WhatsApp number.
Daffy added;

@bobrisky222 WAKE UP !!!!! WAITING FOR YOU BIG MOUTH!!!! Please help me wake him up I am waiting sha. PLEASE COME WITH CLEAN FACE,NOT FACE WEY FULL OF MAKE UP LIKE BIRTHDAY CAKE