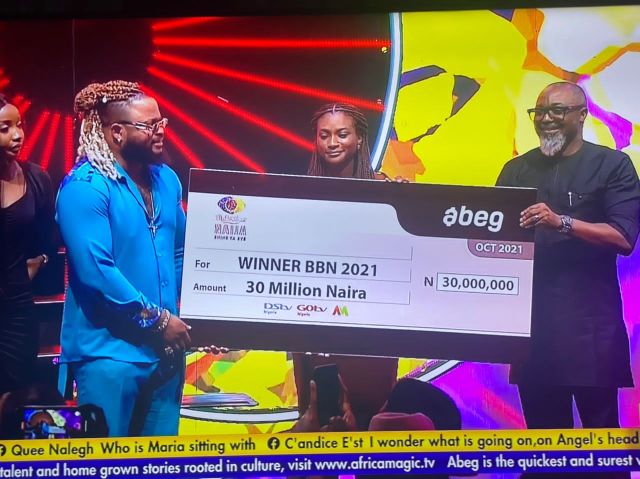 The BBNaija show which is the biggest reality tv show in Nigeria began 10 weeks ago, on 24 July, and lasted for 72 days

Other perks, which make up the N90m grand prize, include Bitcoins courtesy of Patricia, a two-bedroom apartment courtesy of RevolutionPlus Property, G-40 SUV from a Nigerian automaker, Innoson Motors, and a trip-for-two packaged by Travelbeta.

Others are a year’s supply of Dano, Munch it, Pepsi, Gulder, Orijin, a branded chiller, and a brand new latest Tecno mobile smartphone, among other prizes.

Whitemoney radiated of happiness at the prize presentation event which all the housemates of this year’s episode, the sponsors, and the executive directors of multi-choice companies were present at.

Shortly after the prize presentation ceremony, Whitemoney was briefly interviewed by the show host, Ebuka Obi-Uchendu.

During the interview, he acknowledged Liquorose as his competition during his stay in the house.

He said: ‘‘At no point in the house did I ever see myself as the winner especially with Liquorose in the house. I saw Liquorose as my competition. It was very clear, I told her literally that what happened between Mike and Mercy is about to play out again, at that point, no point. I mean when we were both on stage at the finals.

‘‘This season, what surprised me is the fact that almost everybody here is very learned in words, spoken words, and everything. I think I was the only odd one. So, I felt like, guy, just go to the kitchen, maintain that place. So I looked up to myself, I didn’t expect it, there were strong characters.”

Asked what he would do with the prize money, he said: ‘‘It will be in the account, yes it will be there. We have other things to deliberate about now, that thing needs properly. you get the point now”

According to the organisers of the show, the 2021 edition recorded a total of over one billion votes across all platforms, the highest since the inception of the show. They also announced that more than 300 million votes were cast in the grand finale week.