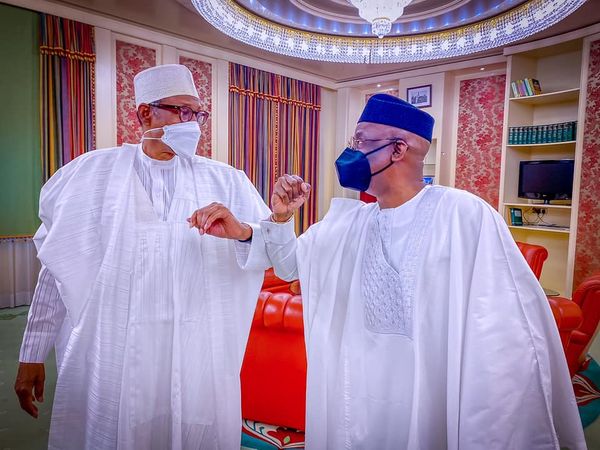 The President, Major General Muhammadu Buhari (retd.), met with the Serving Overseer of The Citadel Global Community Church, Pastor Tunde Bakare, at the Presidential Villa in Abuja on Friday.

This meeting was disclosed by the Special Adviser to the President on Media and Publicity, Femi Adesina who shared photos from the meeting on social media.

The presidential aide, Femi ,however, failed to disclose details of the meeting.

It was reported that Bakare, a few days ago, called for a change of guard in the country, saying those around President Buhari look tired.

He said, “Change of guards simply means that we need fresh hands and insights into how to fix the problems of Nigeria.

“Everyone looks tired around the President and we need a change of guards to bring competent people to handle critical issues. I’m not advocating coup d’etat, God forbid; that will set us back by many years again. Military coup landed us in the trouble we are.”

Pastor Tunde also called for a change to the 1999 Constitution, adding that it was erroneous to say the unity of the nation was not negotiable.

He said, “The 1999 Constitution was imposed upon the nation by the military and has completely removed the ancient landmark set by our founding fathers in the 1960 Independence Constitution and the subsequent 1963 Republican Constitution respectively.

“Truth be told, the majority of the champions, promoters and supporters of the “our unity is non-negotiable” slogan pay lip service to a version of unity that serves their selfish interests. What they are insisting on, in reality, is that “our disunity is non-negotiable,” and that we must be forced to live together irrespective of the inherent dysfunctionality of the terms and conditions.”