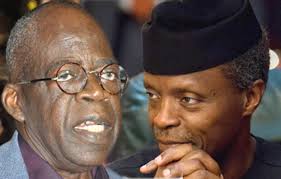 Vice President Yemi Osinbajo is set to fight the presidential battle of his life following a clash of his ambition with that of the National Leader of the All Progressives Congress (APC), Senator Bola Tinubu, THISDAY’s investigation has revealed.

THISDAY gathered that Osinbajo has been left with no other option than to throw his hat into the ring after he was snubbed in London by the former Governor of Lagos State.

Tinubu had earlier this month returned to Nigeria after spending over three months in London on medical vacation.The two-term governor of Lagos State, whose health has been a subject of controversy was reported to have undergone knee surgery in London.

A source close to Osinbajo, however, told THISDAY last night that Tinubu snubbed the vice president during his medical vacation in London.

“Essentially, Osinbajo arrived London to attend a conference and then, see Tinubu. As he arrived, he was supposed to see Tinubu the next morning but Tinubu left town by 6 a.m. the next morning to avoid seeing him. Even Adeboye (General Overseer of the Redeemed Christian Church of God, Pastor Enoch Adeboye) had arrived a day earlier and they planned to see Tinubu,” the source said.

The source further disclosed that the vice president has to make up his mind after his failed bid to see Tinubu.

“Tinubu has ramped up his campaign and Osinbajo also wants to be president and both cannot be president.

“So, now the die is cast for the battle of his life. He has not decided to run but a lot of people are mobilising him to run,” the source explained.

However, according to a source close to Tinubu, the former governor of Lagos State had been in London for two and a half months, adding that if Osinbajo wanted to come and see him, he had enough time.

“The president came to see Asiwaju; other leaders came; Osinbajo did not come. If Osinbajo had wanted to come, he had enough time to do so. Tinubu wanted to return because he wanted to avoid the crowd in Lagos. And he returned when he did,” he explained.

Strong indications that Osinbajo may part ways with his political mentor over the 2023 presidency had emerged during his birthday in March 2020 when Governor Abdullahi Sule of Nasarawa State, who delivered an address on behalf of the APC Progressives Governors Forum, hinted that Osinbajo is a good candidate to succeed Buhari.

Osinbajo’s supporters, under the aegis of the Progressives Consolidation Group (PCG), were the first and only support group that has received the approval of the APC to canvass support for his emergence as the party’s presidential candidate for the 2023 presidential election.

The approval was contained in a letter titled, ‘Letter of Recognition as a Support Group,’ dated October 4, 2021, and signed by the Director of Administration of the APC, Alhaji Abubakar Suleiman.

The letter, which was addressed to the PCG, read in part, “We write to inform you that the National Chairman, His Excellency, Mai Mala Buni, has approved your recognition as a support group of the party.”

Even though the supporters of Osinbajo and Tinubu have insisted that the alleged attempt to pit the two leaders against each other will fail, there are no indications that any of them will drop his presidential aspiration.

Reacting to a report where groups said to be supporting Tinubu and Osinbajo were pitted against each other over the 2023 presidency, the Special Adviser to the President on Political Matters, Senator Babafemi Ojudu, had stated in a statement that neither the vice-president nor his office will endorse “this kind of a divisive engagement and news reports”.