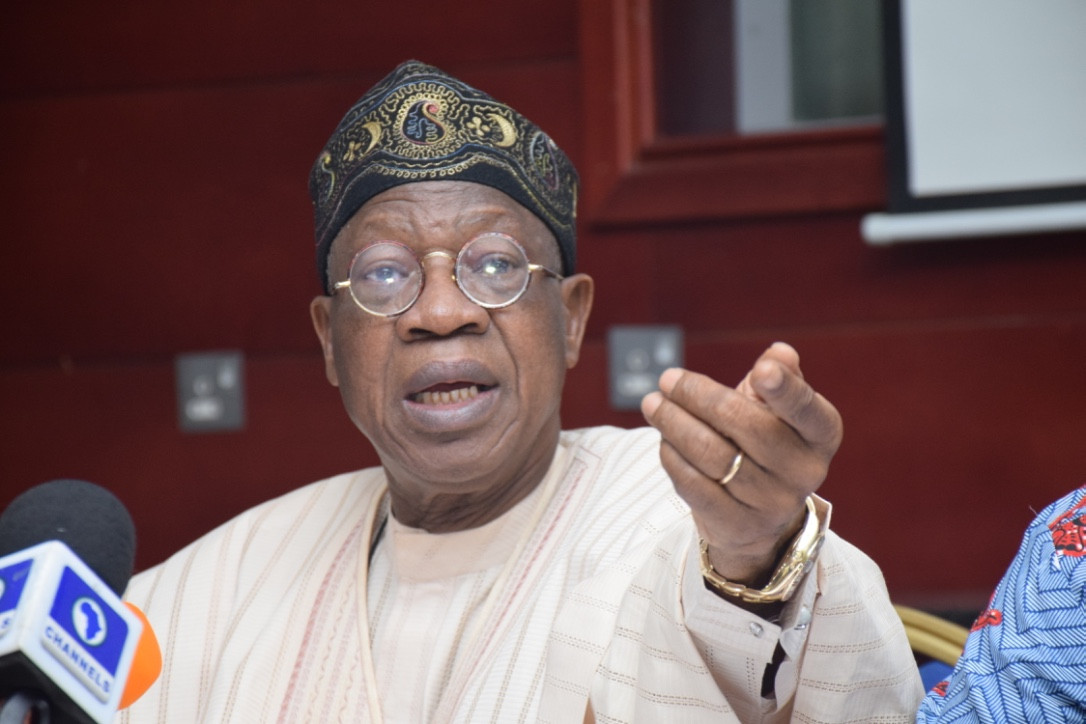 The Minister of information and Culture, Lai Mohammed, on Tuesday said media practitioners are going through a time which calls for utmost caution in their reportage of activities about Nigeria.

Mohammed made the call at a forum to mark the 2021 Global Media and Information Literacy Week organised by UNESCO Regional Office in Abuja.

Represented by Mr Buki Ponle, the Managing Director and Chief Executive Officer of the News Agency of Nigeria (NAN), the minister said, “The media is a veritable instrument to promote the public good.”

He said: “Today, everyone with a mobile phone with a camera has turned into a journalist taking pictures accompanied by inflammatory and damaging write-ups and unbridled circulation dished out in industrial torrents, in a stellar display of unprofessionalism.

“In many instances, the media had exploited our fault lines of ethnicity and religion to undermine Nigeria’s democracy and even threaten national security.

“Today, Nigeria is worse for it, especially in our country where gullibility is so high.

“Let us use the October 2020 #EndSARS violence which raged in parts of the country as a case study. For about two weeks, 57 civilians as well as six soldiers and 37 policemen were killed.

“Also, 196 policemen were injured, 164 police vehicles destroyed and 134 police stations razed with some 269 private/corporate facilities and 243 government facilities either vandalised, looted and/or burnt.

“Some of those who were reported killed through social media misinformation, however, came out to refute such claims.

“By the time the dust settled, about N20 billion verified claims had been lost in just two weeks to the organisation,” he said.

He added: “Knowing too well that no investor would sink scarce resources in an environment marked by violence and general insecurity, the media has the responsibility to exercise restraint in promoting the type of incendiary reportage.

“Media practitioners, especially those plying their trade on the social media, must also begin to reason in the line of self-censorship in order to purge editorial content of reports which accentuate the country’s fault lines.

“In the light of recent events, some school of thought has canvassed some form of regulation to complement the existing rules and policy guidelines, if sanity must be restored in the industry.

“Incidentally, this in itself is not a new development across the globe, especially in western democracies.

“In the European Union for example, there are efforts to go beyond self regulation by social media providers to a shift toward greater legal regulation for social media.

“In Canada, there is a directive to create new regulations for social media while in Germany, social media companies and individuals risk penalty where abuse is established,”.

The minister, who described the media as an enabler of democracy, urged practitioners to adhere to the ethics of the profession.

“The challenge before the media is to assist and nurture Nigeria’s fledgling democracy through observance of the code of ethics of the journalism profession. These include promoting truth and accuracy.

“Our professional bodies, such as the NUJ, the NGE, NPAN, GOSOP and BON, should escalate their campaign of saying we have no other country to call our own.

“Our human rights activists should help in resonating the fact that rights also carry responsibilities,” he added.