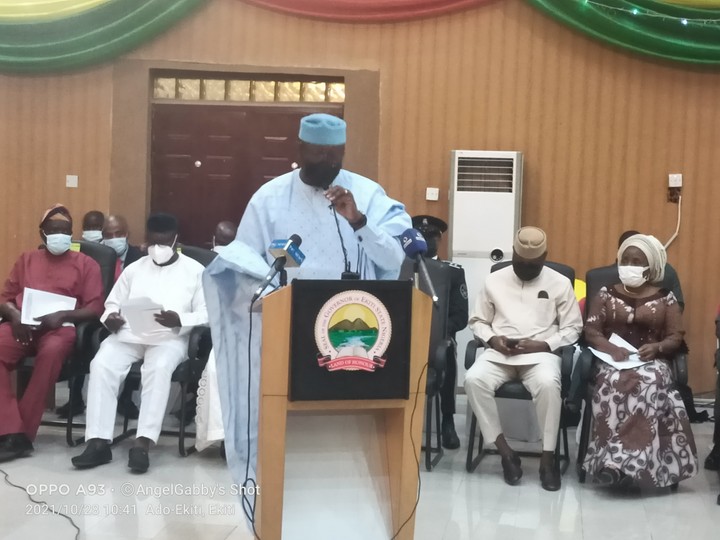 Ekiti State Governor, Dr Kayode Fayemi, on Thursday, presented the 2022 budget estimate of N100,753, 993,241.60 christened “Budget of Legacy and Consolidation” to the State House of Assembly.

Dr Fayemi disclosed that the major objective of the budget is to ensure that all ongoing legacy projects including the State Cargo airport and the new Ado-Iyin road and other new road projects were completed to consolidate his administration’s plan to transform the state.

He added that the budget was designed to reduce unemployment, attract more investors, ensure smooth transition to the in-coming administration, increase the state’s internal generated revenue, improve security architectures, contain the spread of covid-19 third wave and reduce its negative impact on the livelihood of the people, among others.

Dr Fayemi said: “Rt. Hon. Speaker Sir, Honourable Members, Ladies and Gentlemen, may I state that 2022 fiscal year is a watershed in the life of this administration on one hand, and in Ekiti State in general.

“It is a year of transition to a new administration. To this end, the primary objective of the 2022 Budget is to complete and consolidate on our numerous achievements and prepare a solid economic foundation for the in-coming administration.

“Therefore, only critical projects and programmes of short-term completion that will boost the economy of the State through attraction of more investors and mitigate against the risk of climate change have been considered in the 2022 Budget.”

He reiterated his administration’s commitment to prioritizing worker’s welfare adding that adequate provision has been made in the budget to defray backlog of salary arrears inherited from the past administration.

The Governor also announced that the 2022 budget incorporated the budget proposal submitted by the two arms of government to the executive in accordance with the provisions of the fund management law.

Dr Fayemi further informed members of the house that adequate provision has been made for the completion of ongoing Nigeria Erosion and Watershed Management Project (NEWMAP) channelization project at Oke-Ako-Irele and Oye-Ekiti as well as other on-going ecological projects in the State to safe guard from the effect of ecological degradation and mitigate the risk of climate change.

Giving a breakdown of the budget in accordance with the five point agenda of his administration, governance takes the largest chunk of N36.716,049,580.38 representing 36 per cent, followed by Infrastructure and Industrial Development which take N28,056,524,153.02 representing 28 percent.

The Governor, however noted that agriculture in the State is driven by private sector with an investment of over USD 300,000,000.

Governor Fayemi who also commended the Speaker Rt. Hon Funminiyi Afuye and other members of the 6th State House of Assembly for supporting programmes and policies geared towards the development of the State, reaffirmed his commitment to sustain the harmonious relationship with the legislature and judiciary for the betterment of the State.

Earlier, the Speaker assured the gathering that the Assembly would work assiduously on the appropriation bill and ensure it’s passage to law before the end of the year.