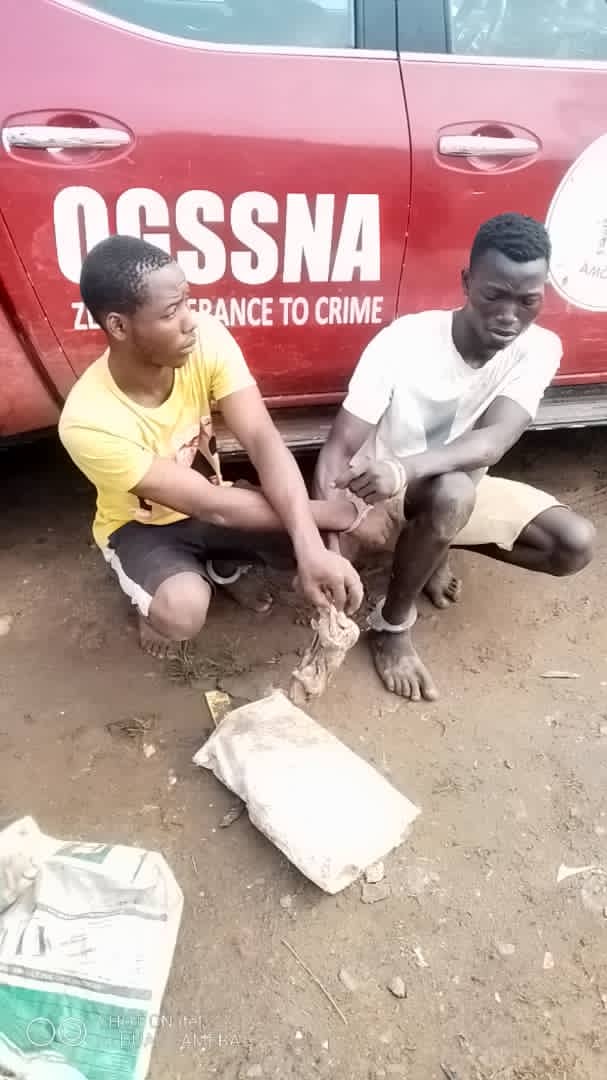 Menn of the Amotekun IJEBU IGBO Command following an information apprehended two young men identified as Dare Banjo who hails from Igbaire Ijebu Igbo and Toheeb Talubi native of Ore in Ondo State for being in possession of a decaying human corpse.

Amotekun said they got the information around 7pm on Monday and imediately swift to action to arrest the suspects at the given location.

On interrogation, they confessed to carrying the died body from an Accident along Ibadan Express Road around a thick forest about 3-4months ago and hid it somewhere.

However, they brought it to town when a native doctor in their area needed parts of the body. They also mentioned another accomplice who is on the run named Moyinoluwa.

When asked the motive behing bringing a corpse from an accident, one of the suspects Dare Banjo said they just brought it home because the bones from the body might be useful to someone else.

However he could not tell how many and what parts of the body their other accomplice ‘Moyinoluwa’ gave the native doctor as he could not bring himself to give them out.

Amotekun also found some remains of the victim in the suspect house which has decayed, giving the impression that they were either ritualists or people who sell body parts to ritualists.

As at the time of filling this report, the case has been oficially transferred to the IJEBU IGBO DIVISIONAL Police Topon, under D.P.O. DSP Solotan.