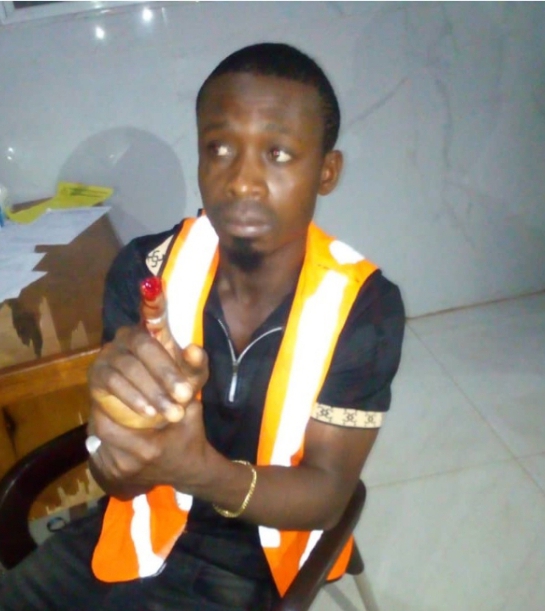 The taskforce officer had his finger bitten off by a driver who was trying to resist arrest for parking illegally to pick passengers in Abakaliki the capital of Ebonyi State.

The commercial driver who did not just bite the finger off also swallowed a part of it.

This action by the driver left Iboko Kenneth in pains, and his colleagues in shock.

The drivers who were caught flouting the directives of the state government to relocate all commercial transport companies to a new park known as Akubaraoha Central park provided for them in the state capital, were all trying to escape when Kenneth attempted to arrest one of the drivers.

The driver who later escaped with Kenneth’s finger in his stomach had his vehicle impounded by Kenneth’s colleagues at the scene of the incident.

The victim was immediately taken to hospital in Abakaliki for treatment.

Reacting to the incident, the Commissioner For Capital City Development, Chief Onyekachi Nwebonyi, described the incident as terrible, unexpected and barbaric.

“It is very unfortunate that a driver can attack a law officer who is trying to organize the state to the point of chopping off his finger, this is terrible, unexpected and it is barbaric. So, I want to plead with the motorists not to pull our legs because the taskforce are not weak and we do our job within the confides of the law but for a driver to chop-off a taskforce finger is unacceptable and I assure you that we will get to the root of the matter, it will not happen again.

“We are not using force but the problem is that our people are stubborn particularly the motorists, some of them anyway. But before then, I want to commend some of the transport companies for their cooperation so far that led to the peaceful relocation of the parks within the city to the central park known as Akubaraoha Abakaliki Central Park and if you go there now, the park is very peaceful, businesses are going on, no complain. As government, we are doing our best to fence the place and put internal roads and other social amenities.

“But we have discovered with dismay that some drivers are bent on operating from the streets instead of doing the needful by joining their colleagues at the central park. My encounter with them this morning is an evidence to that assertion. Along water works road, behind the police checkpoints there, we saw over 10 buses loading Enugu and Onitsha.
“We also patrol to Onuebonyi junction, we also saw 11 trucks, buses, sienna buses loading there not minding our repeated warnings to that effect.”

Those caught would be arraigned before the court.