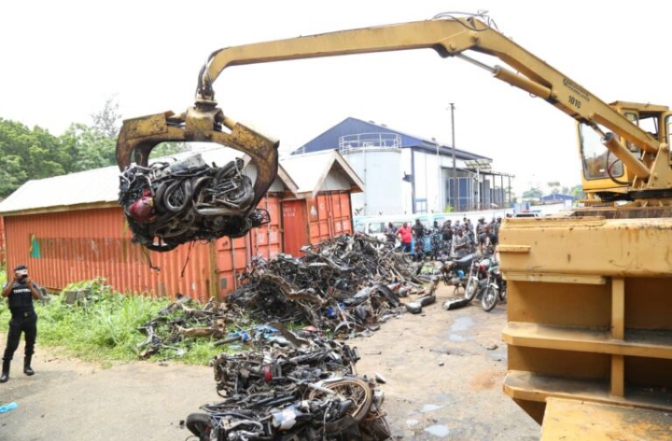 A total of 482 motorcycles were crushed today, Saturday at the Alausa ikeja secretariat, Lagos.

The State government had early this year banned the activities of motorcycles popularly called Okada in order to curb the crime rates that keeps increasing.

The state commissioner of police, Hakeem Odumosu, who was at the scene of the crushing said the exercise has been going on since the ban was declared.

He further said the public crushing was carried out to convince the members of the public that seized motorcycles were never sold as claimed.

Most of these bikes were impounded at Ojodu Berger, Ketu Alapere, Agric and Ikeja areas for violating the law.

To avoid facing the law, he warned motorcyclists who are fond of going against the traffic law, following the wrong route, and also those using it for criminal activities to repent, anyone caught in the act will have the law to answer to.

He said: We assures the general public that this will be a continuous exercise, and the Nigeria Police will not hesitate to do the needful”.