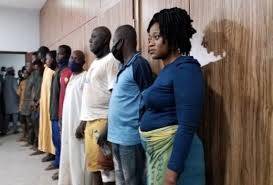 One of the aides of Yoruba Nation agitator, Sunday ‘Igboho’ Adeyemo, Oluwakemi Ifeoluwa popularly known as Lady K, has again recounted her ordeal in the detention of Department of State Services.

Lady K was arrested by a combined team of military men, who attacked the residence of Igboho on July 1, 2021 at the Soka area of Ibadan, Oyo State.

She was arrested with 11 other aides of Igboho and taken to a DSS facility in Abuja before she was released after spending 114 days under inhuman treatment.

Sharing her horrible experience, she said, “When the shooting was so intense, I hid myself in a room, that was where they came for me. I had already made up my mind that it would be my last day. I opened the door to surrender myself. I was beaten mercilessly with objects to the extent that I cannot not walk normally till today.

“Others were equally beaten before we were taken to Abuja DSS custody. I was locked up in a room for 114 days with different kinds of torture. I was fed with rice and beans that are not well cooked; I was given chemical to drink. They threatened to either kill me or send me to jail.

“When I asked them what was my offence, they said but for my live exposure of their invasion, no one would have known that they came for Sunday Igboho. They said for me to expose them on live stream on social media, they had two options, either they kill me or send me to jail.

“They told me, ‘You truncated our mission, you are the one who alerted the world of our raid at Igboho house.’

“The threat was so intense to the extent that I started crying, telling them to spare my life to take care of my two kids and my aged mother. But for people who clamoured for our release, only God knows what would have happened to me.

“Since I was released from the dungeon of the DSS, my health has been deteriorating due to the ill-treatment I suffered from the chemical I was forced to drink.”

Igoho is being persecuted by the Nigerian Government for condemning killings by Fulani herders in the South-West and also demanding the creation of Oodua Republic.

He was forced to go underground after the invasion of his Ibadan house by Nigerian security forces in June but was later arrested in Benin Republic on his way to catch a flight to Germany.

President Muhammadu Buhari’s administration has been mounting pressure on Benin Republic to extradite Igboho to Nigeria to face charges.

Several groups around the world have continued to condemn the attack on Igboho and his supporters including his unjust detention in Benin Republic.