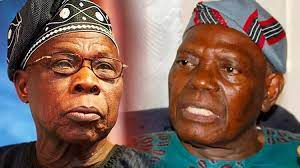 A former governor of Osun State, Prince Olagunsoye Oyinlola, says it is surprising that former National Chairman of the All Progressives Congress, Chief Bisi Akande, attacked ex-President Olusegun Obasanjo despite the love he (Obasanjo) showered on him while he was President.

Oyinlola stated this on Thursday in a statement in response to the allegation made against him by Akande in his 559-page autobiography, titled ‘My Participations’, launched in Lagos last week.

Akande, in the book, had attacked Oyinlola; Obasanjo; leader of pan-Yoruba socio-political group, Afenifere, Chief Ayo Adebanjo; and other elder statesmen in the South-West who were critical of the regime of the President, Major General Muhammadu Buhari (retd.).

Akande had described Obasanjo as a “faithless suitor” and “unblinking political philanderer” while he also separately accused both Adebanjo and Oyinlola of corruption.

But reacting in a statement titled, ‘Oyinlola’s preliminary response to Bisi Akande’, Oyinlola said, “Chief Akande said I wrongly accused him of corruption in the construction of the Governor’s Office (Bola Ige House). I did not level any false charges against him. I came into office in May 2003 and discovered that the Governor’s Office complex which Akande commissioned for use after he lost the election was really not completed.

“The state government asked the contractor to come back to site and complete the works, more so when evidence in government accounts showed that he had been paid. But the project consultant shocked everyone with his claim that part of the payment was taken back to finance the 2003 re-election bid of Chief Akande.

“The consultant said the contractor could not go back to work unless he was paid his full dues. One of Akande’s own appointees confessed collecting money from this contractor for Akande’s re-election. I consulted Chief Akande on this. He denied having any deal with the contractor and the consultant. Some people were subsequently taken to court on a seven-count criminal charge. Stakeholders in the state and Alhaji Arisekola Alao later intervened. I have the details of who collected how much in my forthcoming book.”

Continuing, Oyinlola alleged, “Chief Akande wrote on the Government House that he wanted to build on a site on Ilesa road in Osogbo which I stopped. I found it strange that Chief Akande who boasted that he was prudent and honest as governor, awarded the construction of a Government House in his last days in office, after he lost the election, and in advance, paid the contractors the entire contract sum of N800 million.

“Chief Akande confirmed this strange payment on page 393 of his book. This was a man who said there was no money to pay workers and pensioners but he had enough to pay a contractor in advance for a government house after losing his re-election.

“In any case, the state already had an ongoing Government House started by the military government which Akande refused to complete. I completed the project and added chalets plus a presidential lodge. Everything was completed and commissioned within my first year in office. The state has continued to use the structures till date. Akande, in his book, condemned my decision to opt for that project instead of his own idea. Further details on this are in my forthcoming book.”

Oyinlola also said contrary to what Akande said that the 2003 governorship election in Osun State was rigged in his (Oyinola’s) favour, Akande lost his reelection because he fought everyone in the state.

Oyinlola further said he never begged Akande and he was not his errand boy.

He added, “Finally, I take responsibility for every action I took as governor. Chief Akande said I apologized to him for my actions as governor. That is not true. As governor, I feared only God and was nobody’s errand boy.

“I say so because I noticed that Chief Akande repeatedly blamed President Olusegun Obasanjo for the steps I took which he didn’t like. Ironically, Chief Akande was President Obasanjo’s favourite and the President always said this to those of us in his party. The saying that came to my mind when I read Chief Akande’s attacks on Obasanjo is ‘Eni a fe l’a mo, a o mo eni to fe ni (We only know those we love, we do not know those who love us)’.