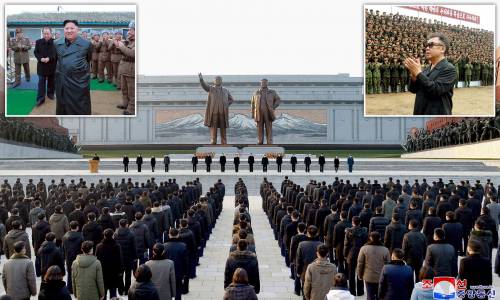 North Korean Citizens have been ordered not to show any signs of happiness while they commemorates the late leader’s death, this was said by their government.

The North Korean government has barred citizens from laughing or drinking for 11 days to mark the tenth anniversary of former leader Kim Jong Il’s death.

The late ruler was at the helm of affairs for 17 years from 1994 to 2011 when he died and was then succeeded by his third and youngest son, Kim Jong Un.

In commemoration of his death, North Koreans have been told to observe the 11-day period of mourning where they are not allowed to laugh or drink alcohol.

“During the mourning period, we must not drink alcohol, laugh or engage in leisure activities,” Radio Free Asia (RFA) quoted a citizen as saying.

The source added that North Koreans are not allowed to go grocery shopping on December 17 – the anniversary of Kim Jong Il’s death.

“In the past, many people who were caught drinking or being intoxicated during the mourning period were arrested and treated as ideological criminals. They were taken away and never seen again.”

“Even if your family member dies during the mourning period, you are not allowed to cry out loud and the body must be taken out after it’s over. People cannot even celebrate their own birthdays if they fall within the mourning period.”

After 17 long years of brutal and repressive dictatorship, Kim Jong Il had died of a heart attack on December 17 2011 at the age of 69.

While the mourning period held every year for Kim Jong Il is usually 10 days, this year it will be 11 days to mark the tenth anniversary of his death.

A source from the southwestern province of South Hwanghae, said police officers were told to watch for people who fail to look appropriately upset during the mourning period.

The source told the radio station: “From the first day of December, they will have a special duty to crack down on those who harm the mood of collective mourning.

”It’s a month-long special duty for the police. I heard that law enforcement officials cannot sleep at all.’

Also, the source noted that citizens groups and state-owned companies have been ordered to take care of those in poverty during the period of mourning, as the country grapples with a food crisis.

“Social order and safety must be ensured, so companies are responsible for collecting food to give to residents and employees who cannot come to work due to food shortages.

“Residents must also work together to help out the kotjebi [North Korea’s street beggars].”

”Residents are complaining that the living are forced to mourn these two dead people to death.”

Kim Jong Un is the third and youngest son of Kim Jong Il and assumed power upon his father’s death in 2011.

To commemorate the tenth anniversary of Kim Jong Il’s death, various provinces across North Korea are holding exhibitions of his photography and holding concerts in his memory.