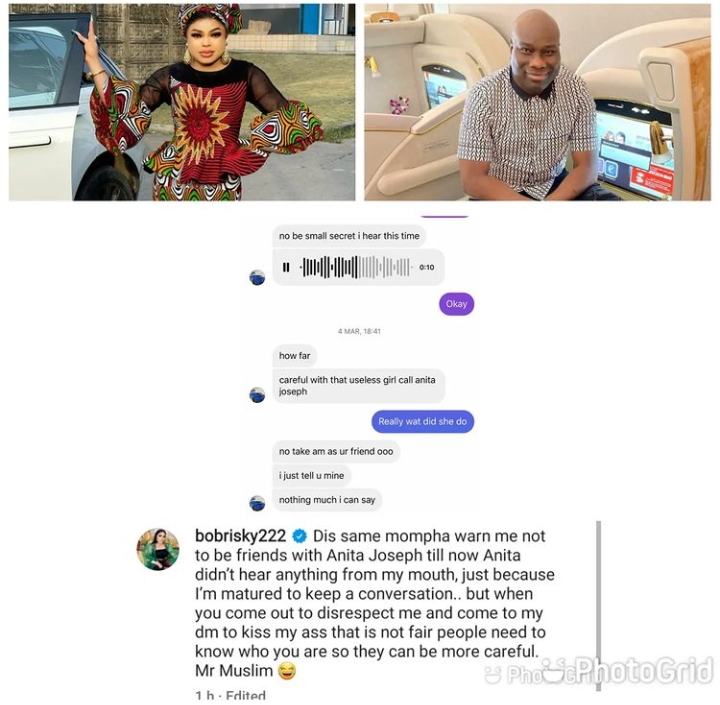 Bobrisky has shared screenshots of some of his chats with businessman Mompha, after he claimed they are not friends and he doesn’t associate with gay people this afternoon.

Past of Mompha statement read ” ThereforeI am using this medium to sound a note of warning to Bobrisky, to desist from mentioning my name in any fight he might have with Tonto Dikeh or anyone whatsoever as he is not my friend and I do not waste my precious time on frivolities.Any further attempt by Bobrisky to drag me into his issues will be addressed by my lawyers in court. PS. I want it to be in the public that I, Ismail Mustapha, as a devoted Muslima and a family man have never and will never associate myself with gay people. My faith forbids it”

However, from the chats Bobrisky shared including voice notes, Mompha expressed his excitement after it was reported that Tonto Dikeh’s issue with Bobrisky allegedly began after she told the cross-dresser that she liked Mompha and wanted to get close to him.

Bobrisky also accused the businessman of being two-faced, as he shared another chat where Mompha warned him to stop being friends with actress Anita Joseph describing her as a “useless girl”.

The cross-dresser stat@ed that he never told Anita because he was being mature. Bobrisky also warned Mompha not to push because it would be “blo*dy”.