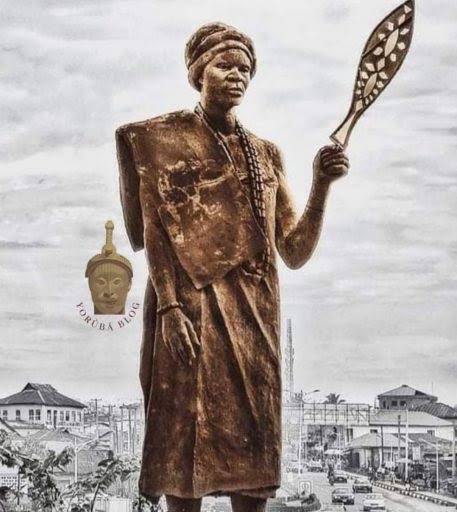 The life story of Madam Efunsetan Aniwura, Yoruba’s Most Powerful Woman That Ever Lived?

But all along, the story of Efunsetan had been written and foretold by her tormentors and painted grimly by mostly chauvinistic men.

It must be understood the context of Efunsetan’s coming into global fame, at least at this time, the World was defined as the circumference within which local people operated within a phenomenon.

The 1700s up to 1900 were centuries of great wars and arms build-up in the vast Yoruba country of old. It was a period of great revolutions and social upheavals across the Yoruba country. It saw the massive production of weapons and the importation of military hardwares by Yoruba leaders, from as far as Hambourg in Germany.
I visited the Ogedengbe of Ilesa few months ago and was thrilled by the amazing exploits of Ogedengbe, the war General who led the Ekitiparapo war and who by 1860s was importing military weapons from Europe in the prosecution of war.

To show the grandeur of the Yoruba nation, around 1880, it was reported that the then King of England had invited Ogedengbe for a state visit. England marveled at the military tactics of Ogedengbe, his command structure, his Spartan lifestyle, his mysticism and above all, his science of war which he largely derived from the painstaking study of the movement and behavior of animals in moments of ferocious encounters with death or engagement with trembling. It was at this period that a bomb was invented at Okemesi, which turned around the fortunes soldiers of Ekitiparapo war led by Ogedengbe.

Contrary to widespread assumptions, the word KIRIJI actually emanated from the sound of the new weapon produced at Okemesi Ekiti. General Ogedengbe, who was in command of about 100,000 soldiers, had declined the request for a state visit to England, saying that he was too busy with state matters. In Ilesa, during my visit, I saw the picture of the then King of England which the later had sent to Ogedengbe as a mark of respect and honour.

The story of Efunsetan Aniwura is intriguing. Her date of birth remains uncertain, but she must have been born around 1790s or around that period. Yoruba epic films and folklores portray Efunsetan as a very vicious woman, filled with prejudice, a woman who died in tragic circumstances. But there are hidden thrills and heroic feat that those who wrote his history continue to undermine. There is nothing as perplexing as having the story of a great woman being relayed by men, in a society credited for not giving women any chance in socio-political affairs, especially in the primordial times, where women were seen as objects consigned to the kitchen and on the mat top.

It is to the glory of Moremi, that her story definitely ignited passion in subsequent Yoruba women, one of which was Efunsetan Aniwura.

This woman of substance has been consistently portrayed as a villain who ran a Gestapo of sorrow and blood, a blood-sucker who beheaded people’s head at will. No. We must deconstruct the narrative that veiled real stories under the cover of the superiority of men over the distinction of some brave women in our troubled history. Efunsetan was the son of an Egba farmer, Ogunrin, a native of Egba Oke-Ona. She rose to become the Iyalode of Ibadan. She was the first woman to set up a flourishing agrarian economy that employed no fewer than 2000 men and women.

Around 1850, worried by the spread of war and combat in the Yoruba country, she introduced infantry military training into the midst of her workers. She was said to have had her own military training in urban and guerrilla warfare after which she requested that the same training be impacted on her slaves, about 2000 of them.

The workers mainly worked in the vast farmland. They produced cash crops, cotton, groundnuts, maize and beef. She was said to be in possession of a vast dairy farm that could feed the entire Yoruba country and beyond.

She traded up to Ghana and the Hausa country and even exported her produce to Europe. In her book, A History of the Yoruba, Prof Banji Akintoye wrote about Efunsetan who she described as a rich “woman trader” that ‘had more than 2000 workers employed on her farms.”

This was at a time the industrial revolution was gaining strength in Europe and agriculture had become the most industrious enterprise in Yorubaland, being one of the service points for European products.

David Hinderer, a missionary who wanted to erect a Church in Ibadan could not source human labour because all the men and women were engaged in large scale farming. The Generals of the Yoruba Army had also taken to farming to beat famine as a direct consequence of war.

Hinderer wrote of his travel to Ibadan in 1853 with a caravan of traders and carriers “consisting of not less than 4000 people.” Prof Akintoye wrote “It is not unlikely that Efunsetan was the richest person in the whole of the Yoruba interior in about the late 1870s.” Efunsetan had her own pains and anguish.

She had no child after several years of marriage. Unfortunately, her only daughter died in 1860 during child birth. She also adopted a son, Kumuyilo. Now, having lost her only daughter, she went into recluse and became suspicious of life and living. She even became an atheist, ignoring all the gods wondering why she should lose her only daughter.

She may have been pushed to some form of extremism. She ordered that no one among her 2000 workers must marry or have sex within and non of the girls must conceive. It came that one of the workers broke the law. She ordered that the woman be executed. No doubt that she carried out outrageous order of execution, but this was nothing compared with her heroic contributions to the economy of the Yoruba nation.

Due to this act, the Aare ordered that she be brought to justice. This was just the proverbial hawk that was looking for every opportunity to clawlift the chicken.

It is believed that her persecutors merely waited for her to carry out a dastardly act as an opportunity to seek revenge against her perceived emergence as a strong and influential woman, whose mutual rival was Madam Tinubu of Lagos who was also her friend. It was at a time her own army had become a threat to the fiery army of Latoosa.

How could a woman raise such a vast array of armed soldiers? There are two varying accounts of her death. One claimed Aare Latoosa led a strong infantry army to lay siege on her house and instead of being overpowered, she committed suicide by drinking the Hemlock.

At this period, her army had been divided and the loyalty fractured due to the execution of some of the 2000 workers for acts inimical to her authority. The other story said Kumuyilo was bribed by Latoosa to poison her but that the attack on her was carried out in the night by two of her slaves who sneaked into her apartment through the ceiling and clubbed her.

There were events that indicated that the Ibadan chiefs were unhappy with the way Efunsetan was brought on her knees. Infact, with Latoosa there was a meeting on 8th of July when the Egba leaders came to Ibadan requesting for a Commission of Inquiry on the murder of Efunsetan.

The two slaves were subsequently brought before the Ibadan traditional court on 10th of July 1874. They were impaled right at the Basorun market. Efunsetan has been painted in forbidding pictures through Yoruba history.

It is time to deconstruct and give her due honour as a heroine. At death, Efunsetan’s property was declared the property of the Yoruba country, she was burial with full military honours in Ibadan after her death

Efunsetan Aniwura’s statue is at Challenge Roundabout in Ibadan.