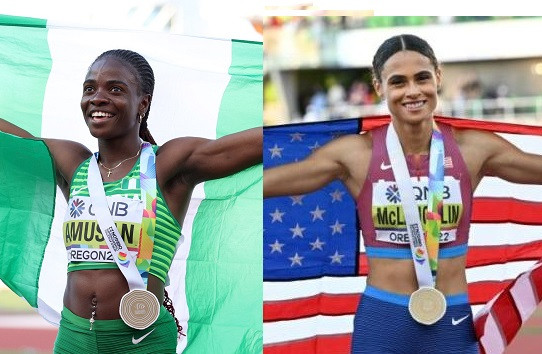 The World Athletics has named American hurdler Sydney McLaughlin-Levrone the Female World Athlete of the Year, beating Nigeria’s Tobi Amusan and three others for the prestigious honour.

The World Athletics announced the American 400m hurdles Olympics and World Champion and World Record holder as the winner on its website.

McLaughlin-Levrone improved her own world 400m hurdles record by 0.78, first to 51.41 at the US Championships and then to an awe-inspiring 50.68 at the World Championships. That secured her a first individual senior world title, and she followed it by anchoring the US team to another 4x400m victory.

The 23-year-old made a statement with her first 400m hurdles race of the year, clocking 51.61 in Nashville in early June. At that point, it was the third-fastest time ever recorded, but the all-time list soon underwent further revisions.

Lining up at the US Championships at Hayward Field, McLaughlin stormed to victory in the 400m hurdles in 51.41, taking 0.05 off the mark she set at last year’s Tokyo Olympics.

“I think there’s a little bit more in the tank there,” she said after her US Championships win. “Hopefully when it’s time we can just empty it completely.”

Back at Hayward Field a month later, McLaughlin-Levrone obliterated her previous best, running 50.68 as the home crowd and the rest of the world watched on in amazement.

“All of my goals were accomplished this year,” said McLaughlin-Levrone. “We were able to accomplish everything we set out to do. It couldn’t have been any better, and I was so grateful that I was able to produce that performance in front of a home crowd.”

As for Amusan, she took the world by storm when she ran 12.12s in the semi-final of the women’s 100m hurdles at the World Championships in Eugene, USA to break Kendra Harrison’s 12.20s World Record.

Amusan ran a faster time – 12.06s – in the final about one hour later to claim gold. The Nigerian hurdler also retained her Commonwealth Games title in Birmingham, UK, setting a Games record of 12.30s.

She also retained her Diamond League trophy in her season-ending race.