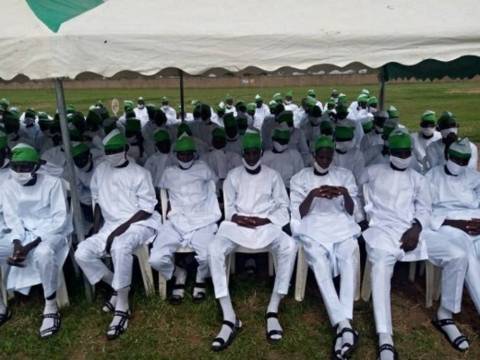 The Borno government confirmed that at least 3,000 persons who were members of the armed opposition group have laid down their arms and surrendered to the Nigerian military

Community leaders in Borno State, on Sunday, agreed to the return of ‘repentant’ Boko Haram terrorists into their communities.

According to PREMIUM TIMES, the decision was taken at a stakeholders’ meeting to discuss the prevailing security situation in the state. The meeting was organised by the government of Borno State.

The Borno government confirmed that at least 3,000 persons who were members of the armed opposition group have laid down their arms and surrendered to the Nigerian military.

Governor Babagana Zulum, who presided over the meeting, disclosed that apart from the 3,000 ‘ex-terrorists’ currently in the custody of the government, another 900 confirmed members of Boko Haram have surrendered to the Cameroonian forces.

The governor said the government needed to involve all stakeholders in Borno in the decision-making process on how to deal with the repentant insurgents.

Various stakeholders at the meeting which lasted five hours presented their views on how the ‘former terrorists’ should be accepted and treated in society.

At the end of the meeting, which was attended by many government functionaries, religious and traditional rulers, security operatives and members of the civil society, the gathering issued a communique detailing their resolve to accept the ‘repentant’ insurgents. They, however, gave conditions that must be met before the ‘remorseful’ terrorists are accepted into various communities.

The 16-point communique was signed by the Borno State Attorney General and Commissioner for Justice, Kaka-Shehu Lawan.

According to the communique, the stakeholders called on Nigeria and the state government to “handle the issue of ‘repentant’ Boko Haram insurgents with utmost care and within the instrumentality of the law.

The meeting emphasised the need for “proper profiling of the ‘repentant’ Boko Haram insurgents to avoid hasty release of hardening elements to the larger society.”

They called on Borno citizens to “key into the educational opportunities created by the state government especially by enrolling their children and wards to schools as a countermeasure for indoctrination.”

The meeting also agreed on the need for the establishment of a world-class deradicalisation/rehabilitation centre in Borno State being the epicentre of the insurgency.

The stakeholders, however, called on the Nigerian military “to sustain the ongoing offensive on the activities of ISWAP”.

While calling for a periodic media briefing on the activities of the ‘surrendered’ Boko Haram terrorists as a means of keeping the public abreast of developments, the attendees also insisted that “all firearms and offensive weapons used by the insurgents be retrieved from them.”

During the meeting, one of the speakers, a district head, who identified himself as a “direct victim of Boko Haram” having witnessed the killing of his elder brother by the insurgents, said though they are in tune with the resolve to welcome and receive the insurgents, “it would be very difficult” for them to convince other members of their communities to forgive and accept them unless the government embarked on serious sensitisation “on the need to forgive and forget.”