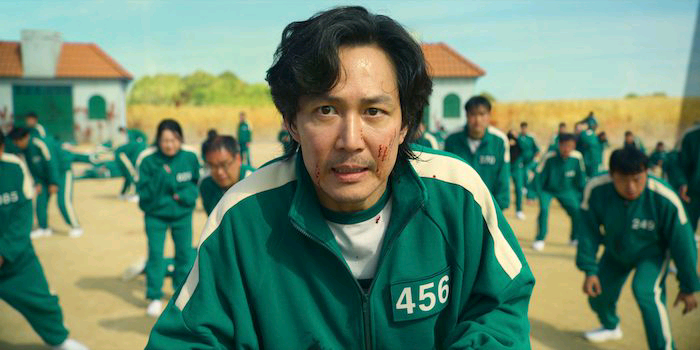 The creepy hyper-violent Korean series which premiered on the platform in September this year, sees 456 desperate contestants compete with each other in a mysterious and deadly survival game. The multiple rounds of games has a top prize of almost £30 million.

The characters take on a traditional children’s game such as Red Light and Green Light, and losing out has an ultimate consequence of death.

Though viewers have been left sickened by the gory scenes in the horror thriller series, it has became a global sensation and topped the charts as the number one show in many countries, including the UK and the US.

Said to be a horrifying version of Takeshi’s Castle, some fans have repeatedly asked if the dystopian show which sheds light on staggering wealth inequalities, was in fact real.

Netflix co-CEO Ted Sarandos who said the series will “definitely be their biggest non-English-language show in the world”, added that there was “a very good chance it’s going to be their biggest show ever”.

If this stands, the show will overtake Bridgerton which is Netflix’s current number one original show of all time. Bridgerton had 82 million subscribers tuning in to watch at least two minutes of the show in its first 28 days on the service

and a whopping 625 million total hours viewed within its first four weeks of release on the service.

As a relatively new title, Squid Game has been on the platform for few days and its popularity seems to be stretching across different mediums. In recent days, fan-made games based on the deadly challenges found in the show have started to crop up all over Roblox. Several Squid Game remakes have also made their way onto the platform’s most popular lists, with many more showing up after a quick search of the buzzworthy title.

The streaming giant has had huge success with international series, with the likes of Germany’s Dark and Spain’s Money Heist proving popular with viewers.