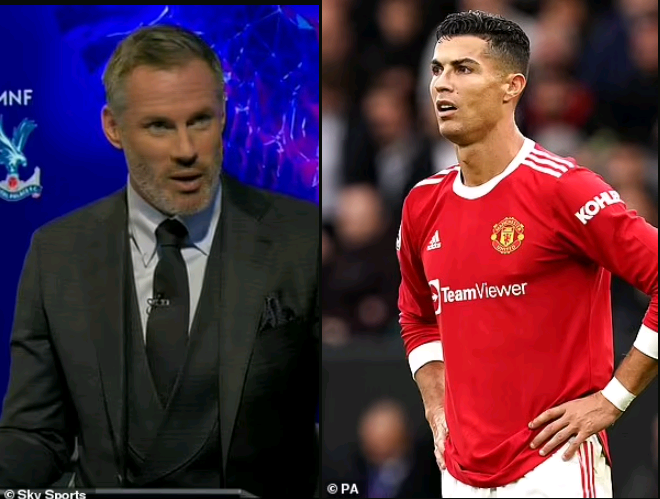 Jamie Carragher Former Liverpool defender, is of the opinion that Cristiano Ronaldo’s return to Manchester United has actually added to the squad’s problem of being a team of individuals.

Ronaldo returned to the club from Juventus in the summer on a two-year contract, and has since scored five goals in five games.

He was named as a substitute for last Saturday’s Old Trafford clash and while Ole Gunnar Solskjaer brought him off the bench after 57 minutes, the Red Devils were held to a 1 – 1 draw.

Sir Alex Ferguson including many others criticized the Norwegian for his decision to start Cristiano Ronaldo on the bench for Manchester United’s draw with Everton.

Reacting to the situation at the Manchester United, Ex-Liverpool defender Carragher told The Telegraph: ‘They remain a team of individuals rather than a team. Cristiano Ronaldo has added to that rather than fixed it. That’s why, despite a brilliant squad, they are not yet at the level of the other three.

Carragher added that champions Manchester City remain the team to beat in the Premier League after the opening seven games of the season, despite Champions League winners Chelsea being top of the table by a point heading into the international break.

‘They (City) are still the team to beat,’ he says. ‘There was a question mark against them after failing to replace Sergio Aguero, but it is business as usual for Pep Guardiola.

‘They have gone to the two toughest venues and taken four points, justifying being favourites to win it again. They will take some stopping.’