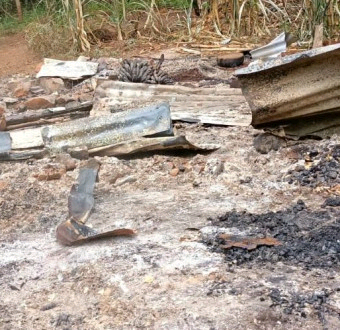 A shocking incident happened at Rwathia village in Karumandi ward, Kirinyaga County of Kenya as a 48-year-old man identified as Joel Muthike set his house on fire, dug his grave and committed suicide.

An eyewitnesses said he set his house on fire and reportedly used a panga (machete) to thwart any effort by the members of the public to try and put out the fire.

It was gathered that after the house was burnt to ashes, Muthike turned his rage to his livestock.

“I have never seen anything like it, he chased us away when we tried to put out the fire.”

Muthike used a rope he had been using to tether his goat, to commit suicide. His body was discovered dangling from a tree within his farm.

Another resident of the community said;

“I am deeply shocked because I have never seen him fuming with such kind of rage.”

His brother, Elias Murimi noted that they intend to bury the remains of the diseased in the grave that he had begun to dig.

Murimi said;
“We have no other option but to bury my brother in the grave that he was digging.”

Confirming the incident, Kirinyaga East Police Commander Antony Mbogo said that they have launched investigations to establish the root cause of the incident.

Mbogo who noted that the diseased did not leave behind a suicide note, added that the deceased was living alone since his wife had passed on some years ago.

“He has a family but his wife had passed on.”