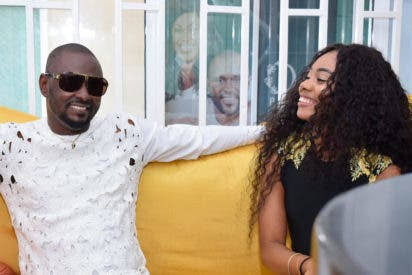 It’s now of common knowledge that ever since the split between former lovers, actress Tonto Dikeh and Joseph Egbri fondly known as Prince Kpokpogri, became public knowledge, the development has become messy with each party making series of accusations against each other

Hours after an audio recording of Prince Kookpogiri confirming he had sex with a certain Jane who is married, Tonto Dikeh’s ex-boyfriend, Prince Kpokpogri, has archived or deleted an apology he wrote to dancer Janemena, her husband and her family.

Prince Kpokpogri issued a public apology on September 27, 2021, to Janemna’s husband via his verified Instagram page.

However, on Saturday, October 16, an audio recording of him speaking about the sexual prowess of a certain Jane surfaced online.

Prince who spoke in pidgin English said he and Jane have had ”dirty sex” and that Jane mentioned to him that the sex they’ve had she has not experienced it with her husband in the nine years they’ve been together.

The Prince added in the leaked phone conversation that most time he had sex with ‘Jane’ for almost a whole day. The voice note further stated that ‘Jane’ is the breadwinner of the family.