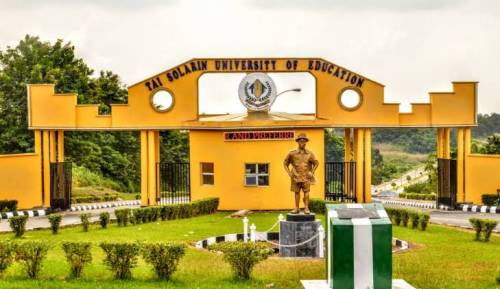 Some students of the Tai Solarin College of Education (TASUED), Ijagun, Ogun State, who were arrested by men of the Nigerian Army from Ilese Barracks, have reportedly been handed over to the Economic and Financial Crimes Commission (EFCC), Ibadan zonal office.

The students were arrested on Thursday, around Conoil filling station along Lagos-Benin highway by the millitary men.

The Vice Chancellor, Professor Wole Banjo, has been running Helter skelter to get the students released, but his efforts were unsuccessful.

The Vice Chancellor has claimed that he did not know why they the students were arrested by the soldiers.

However, the students of TASUED embarked on a protest, on Friday, demanding the release of their colleagues, but the management of the university ordered that they should return to their various home until further notice.

In a statement on Sunday, the President of the National Association of Nigerian Students (NANS), Sunday Asefon, berated the Nigerian Army for handing over the students to the EFCC, wondering when the Army turned an arm of the anti-graft agency.

Asefon said that the four students and the SUG president of TASUED, Sodiq Ridwan, have been released, adding that the others were taken to the EFCC for alleged internet fraud.

The students’ leader recalled issuing a 24-hour ultimatum for the release of the arrested ones on Friday, stating that “the SUG President and four other SUG Executives arrested were released before the expiration of the ultimatum.”

Asefon, who said he did not support internet fraud, held the firm belief that “the Nigerian Army has no business arresting internet fraudsters.”

According to him, the army’s decision to transfer the students to the EFCC was “an afterthought because of the dimension the case has taken.”

He opined that, “the Nigerian Army should be too busy fighting insecurity across the country than pursuing petty criminals and causing unrest in our campuses by creating avoidable and unnecessary drama through an excessive show of force.”

He revealed that an internal individualized enquiry into the allegations would be carried out, assuring that “NANS under my watch will ensure their prompt release if our internal investigation suggests lack of evidence against them.”