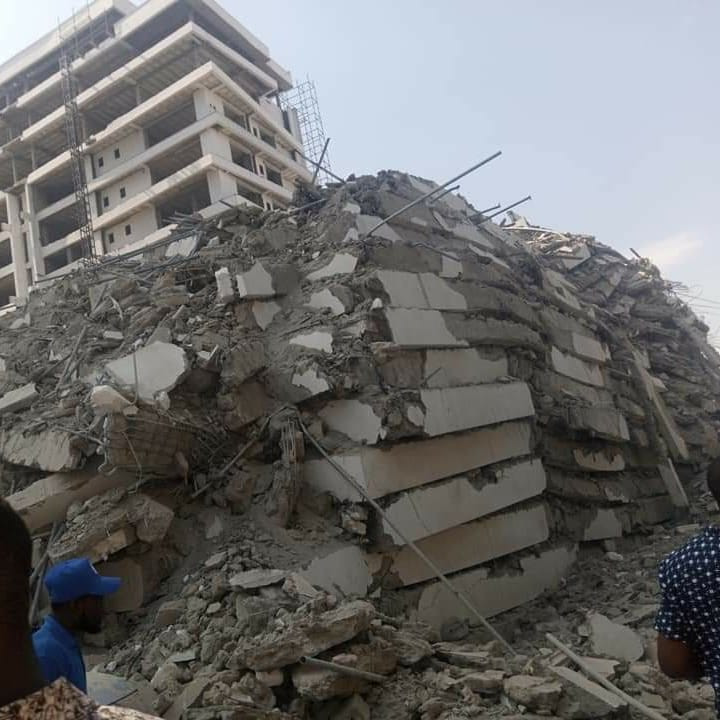 Not less than 3 corpses have been recovered, with dozens of people trapped under the rubble of a 21-storey building that collapsed at Musikiu Junction by Gerard Road, Ikoyi, Lagos.

It was gathered, that the unfortunate incident happened at about 1.30 pm. The building was said to be under construction when it suddenly collapsed on construction workers.

A yellow excavator pushed away concrete slabs in the search for people in the wreckage of the 21-floor building in Lagos’s Ikoyi district.

Lagos State police commissioner Hakeem Olusegun Odumosu said three bodies had been recovered so far and three people rescued. “Three corpses have been recovered and the operation still goes on,” he told reporters.

Rescue officials said “many” workers were caught inside the building when it crumbled, though they could not confirm the number of people trapped or dead.

A lot of angry residents also gathered at the site after the collapse, crying and voicing frustration over the slow pace of the rescue efforts

According to an eyewitness, a few minutes before the collapse, one side of the building’s pillars broke and made a loud noise as the whole building came down.

Mr Thompson David, an eyewitness said: “I saw the building going down, it was so pathetic that I can not help but watch how the building went down from one side of the pillar that probably breaks or something happens to the pillar.