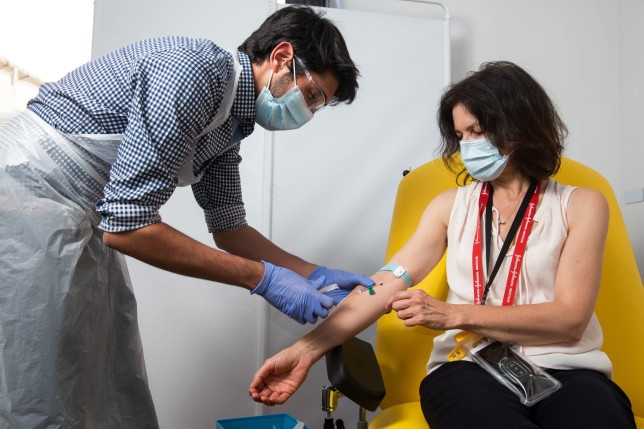 On Thursday November 11 at the University of Oxford, the first human trial of an Ebola vaccine which was developed using the same technology as the AstraZeneca Covid jab, commenced.

The jab is structured to tackle the Zaire and Sudan types of Ebola. which together have caused nearly all Ebola outbreaks and deaths worldwide. The University of Oxford launched a Phase I trial to test the vaccine in human volunteers and is currently recruiting.

The vaccine “ChAdOx1 biEBOV”, will be tested on 26 volunteers aged 18 to 55 years old in order to determine its safety and immunogenicity. Few people lined up and the first vaccinations have already started.

Dr Daniel Jenkin, principal investigator of the trial at the Jenner Institute, University of Oxford, said;

“There are three other important species of Ebola virus out there that these vaccines aren’t approved to prevent.

“We are conducting a clinical trial of a new Ebola vaccine called ‘ChAdOx1 biEBOV,’ which is designed to target two of the deadliest species of Ebola-causing viruses.”

As with the Oxford/AstraZeneca Covid jab, the Ebola vaccine is based on a virus that causes the common cold in chimpanzees, but which has been modified so it cannot cause illness in humans.

However, instead of inserting spike protein genes from the coronavirus into the genetic material of this chimp virus as was the case for the Covid vaccine, the team have loaded the chimp virus with genes for the main protein on the surface of the Ebola virus.

While there are other vaccines in development to protect against more than one species of the Ebola virus, Jenkin said the new jab was the first to use the same underlying technology as employed for the Oxford/AstraZeneca Covid vaccine. That, he added, could bring practical benefits.

“[The Covid jab] is now being manufactured at 20 different manufacturing sites, including in middle income countries.

“Having that proof of concept that a similar vaccine can be manufactured on an incredibly large scale is also a very big advantage.”

Participants will be given one dose of the jab and then followed up over a six-month period to allow researchers to explore the safety of the vaccine and the immune response it triggers.

Volunteers interested in enrolling on the study can do so online via the university. A further trial for the vaccine is due to start in Tanzania by the end of the year.

Highly effective vaccines against Ebola have been developed in recent years but experts warn these have only been approved for one of the four species of the Ebola virus. This is the Zaire species that is responsible for many outbreaks, and has the highest mortality rate, with estimates of between 70% and 90%.