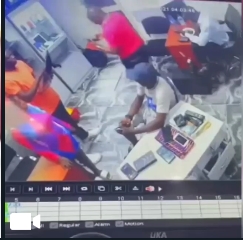 CCTV footage which captured the moment a suspected thief stole an iPhone pro max from a phone shop has been making rounds online.

The suspected thief had visited the shop pretending to be an intending buyer but stole the phone that was placed on the table where he was seated.

He tactically and swiftly moved it with his elbow before placing it in his pocket.

Watch the CCTV footage below