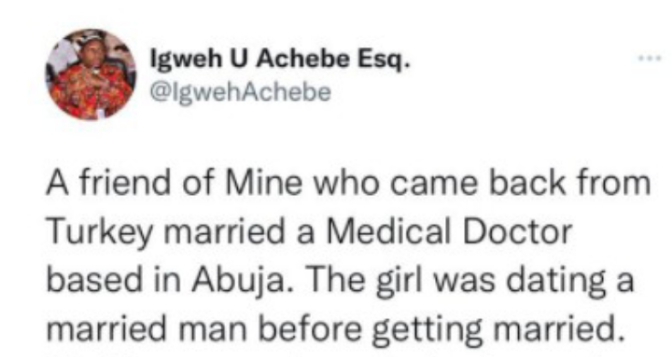 A Turkey-based man is set to divorce his wife who is based in Abuja.

The DNA test that was carried out on the kids revealed that the second son doesn’t belong to him.

“A friend of mine who came back from Turkey married a medical doctor based in Abuja. The girl was dating a married man before getting married.
Well her second son looks exactly like the man she was dating before marriage and DNA just confirmed it. We file for divorce tomorrow.

The funniest thing is that the man even came to her wedding and we didn’t know. Watching the video now, we can see him spraying money. And he is telling my son to return his son to him. The guts”.

The two who couldn’t let go of each other continued with their shameful act after her wedding and the outcome was the said child. The married man in question is asking for his son.