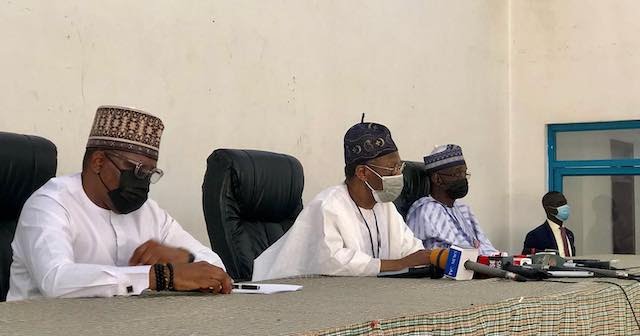 The Minister of Information and Culture, Lai Mohammed has tossed the Lagos state #EndSARS panel report submitted to the state governor last Monday into the bin, saying it’s full of errors, hence they cannot agree that there was a massacre.

Mohammed said he was out of Nigeria when the report of the EndSARS judicial panel was submitted to the Lagos State Governor, Babajide Sanwo-Olu last week.

While addressing a press conference in Abuja today November 23, Mohammed said the findings of the panel were not backed up with facts and that the errors observed in the panel’s report have never been seen in the history of any judicial panel set up in the country.

Part of his speech reads:

“It’s no longer news that the Lagos State Judicial Panel of Inquiry that investigated cases of police brutality as well as the incident of Oct. 20th, 2020, at Lekki Toll Gate in Lagos has submitted its report. The submission happened while I was out of the country on national assignment. Unlike many commentators and analysts, we took our time to read and digest the report, and we are now well placed to respond.

“Without mincing words, never in the history of any judicial panel in Nigeria has a report been so riddled with so many errors, inconsistencies, discrepancies, speculations, innuendoes, omissions and conclusions that are not supported by evidence.

“What is circulating in public space is simply a rehash of the unverified fake news that has been playing on social media since the incident of Oct. 20th 2020. It is simply incredible that a Judicial Panel set up to investigate an incident has submitted a report laden with allegations, the same allegations it was set up to investigate in the first instance. Instead of sitting for all of one year, the panel could have just

“It was a phantom massacre. The report in circulation cannot be relied upon. The leakage of an unsigned report to the public is not enough.

“There is absolutely nothing in the report, circulating, to change our mind that there was a massacre at the Lekki tollgate.”he said