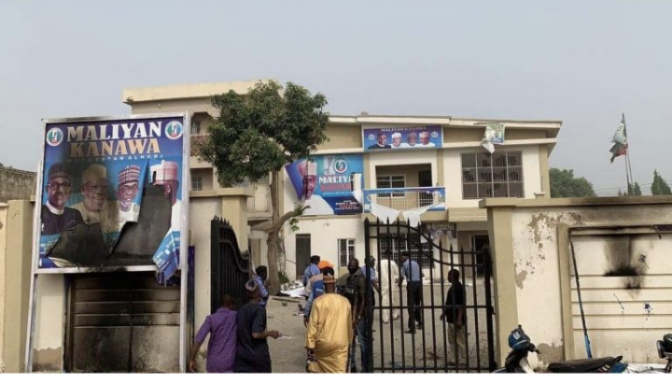 The headquarters located along Maiduguri road in Kano was set ablaze On Thursday morning by angry thugs who were not satisfied with the outcome of the congress that was conducted by Shekarau and Sha’aban Shardadaas.

A Maitama High Court in Abuja had on Tuesday canceled the congress conducted by the state governor, Abdullahi Ganduje In favor of the faction led by the former governor, Shekarau.

Two factional leaders were provided, one from the former governor and the other from the present governor.

A committee was set up to decide who should be the party chairman in the state. The final decision didn’t go well with Shekarau and his group.

Shekarau pushed for the nullification of the committee’s decision.

They approved the congress conducted by the Shekarau faction and restrained the Ganduje faction from appointing someone else. This led to heated arguments on different platforms.

The angry thugs were believed to be from the opposing party. Residents were able to put out the fire before the intervention of the state police