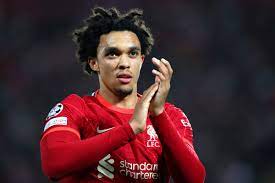 Liverpool FC right-back, Trent Alexander-Arnold, has been named the Premier League’s Player of the Month for November.

This is due to his recent form part of which had him contribute one goal – a pinpoint free-kick away at West Ham United – and four assists to help Liverpool continue a strong push at the top of the table.

Alexander-Arnold, who played every minute of the Reds’ three top-flight games, also aided the securing of two clean sheets.

He won the prize from a shortlist that also included teammate Diogo Jota, plus Joao Cancelo, Emmanuel Dennis, John McGinn and Bernardo Silva.

This is the second time the England international is winning the prize in his Premier League career.