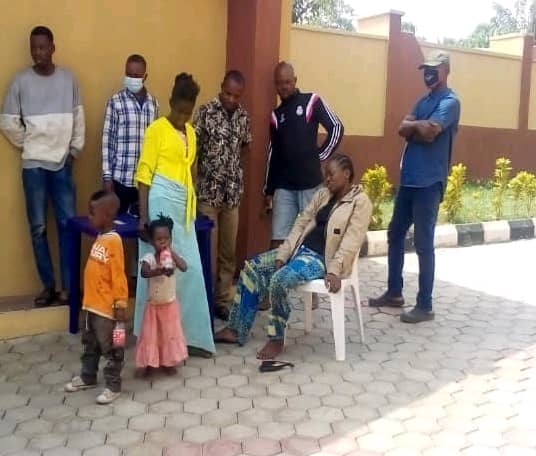 The Joint Patrol team of Amotekun Corps on Saturday, rescued 9 kidnap victims from their abductors along Ipetumodu-Ilesha expressway in Osun state.

Chief Adetunji Adeleye,the Chairman of the Council of Amotekun Commanders in the South-West region, said the victims including two children, were abducted while travelling to Ado-Ekiti from Lagos on Christmas eve.

He explained that the hoodlums stopped the vehicle around 9:30 pm and ordered all the passengers into the bush, dispossessed them of the phones, ATM cards and other valuables while they kept the victims in their den.

He said the kidnappers had been contacting the families of their victims, negotiating for their freedom before the Amotekun Corps, rescued them.

The Ondo Amotekun Commander however, said that his men responded to a distress call, chasing the criminals to their den where all the victims were rescued but their abductors fled from the scene.

According to him, the rescue operation was carried out by the joint team of Amotekun in Ondo and Osun states involved in the inter-border patrol in the southwest, saying they are on the trail of the kidnappers with an assurance that they would be apprehended.

“Around 1 am, we got a distress call from one of the families of the kidnap victims that the Kidnappers called, asking for ransom. We thereafter moved into action. We were able to track the Kidnappers. The victims were rescued and some of their valuables were retrieved but the Kidnappers ran away,” he stated.

“It was along Ipetumodu axis in Osun state and when we got to a village about 10km away from the road, we found out that the den is a regular dump area for Kidnappers because we found so many items which show that it is a permanent place where they keep kidnap victims.

“However, we were able to rescue nine victims and a vehicle. Our men are still there in the bush trailing the Kidnappers but our major concern was to rescue the victims. Our medical team have been attending to them and after completion, we would take them to their various destinations so they can reunite with their families”

Adeleye said the move is to further reassure specifically, the people of Ondo and Osun states, that Amotekun would stop at nothing in joining forces with other security agencies at ensuring that criminals are driven away from the states.

Narrating her ordeal, one of the victims, Ife Balogun, said they were travelling from Lagos to Ekiti state before the unfortunate incident.

She said the driver took the kidnappers for security operatives on the road but they turned out to be criminals, ordering them out of the vehicle.

She added that their abductors kept them in the forest for several hours before the intervention of Amotekun corps, saying the kidnappers fled with valuables.