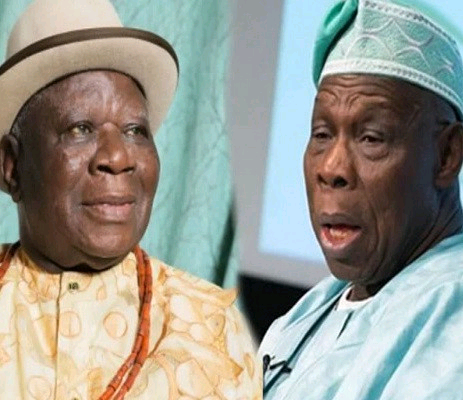 Former Nigerian president Olusegun Obasanjo has responded to Chief Edwin Clark’s opinion to his insistence that the Niger Delta cannot lay claim to the crude oil found in the region.

He had said in Abuja, during a peace and security parley convened by the Global Peace Foundation and Vision Africa, that the oil in the Niger Delta was deposited by God and therefore, belonged to all Nigerians.

Last week, Clark criticised Obasanjo for his statement and accused him of hatred against the oil-producing states.

Obasanjo has now refuted claims by Clark that he hates the people of Niger Delta due to resource control agitation.

Chief Obasanjo reminded the leader of Pan Niger Delta Forum (PANDEF) and Chairman of the Board of Trustees, Ijaw National Congress (INC) that the mineral resources found in any particular state or territory does not belong to the area of location, but to Nigeria.

Obasanjo emphasised that there cannot be two sovereign entities within a country, stressing that this situation cannot change until the Nigerian federation is dissolved.