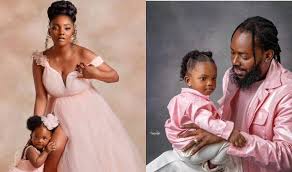 Singer Simi, on Monday received gifts from her fans to mark her third wedding anniversary with her husband, Adekunle Gold.

Simi took to her Instagram story to hail her fans, who call themselves ‘Simi Army’.

Taking to her Instagram account, and showing off the gifts she got from her fans, she stated that she was chilling at home when she was told that there was a surprise for her.

She said: “I don’t know if I’ve said this enough but I feel like the Simi Army is the best bunch of supporters any one can ask for. Take it anywhere and tell anybody. I’ll stand by it 100%. I’m just chilling at home, right? And they told me, ‘Come downstairs Simi, we have a surprise for you’.”

The gifts include a gift box, food tray, drinks, and a customised booklet that had several anniversary wishes from her fans.

Items in the gift box include photo frames of the Kosokos and gifts for Adekunle Gold.