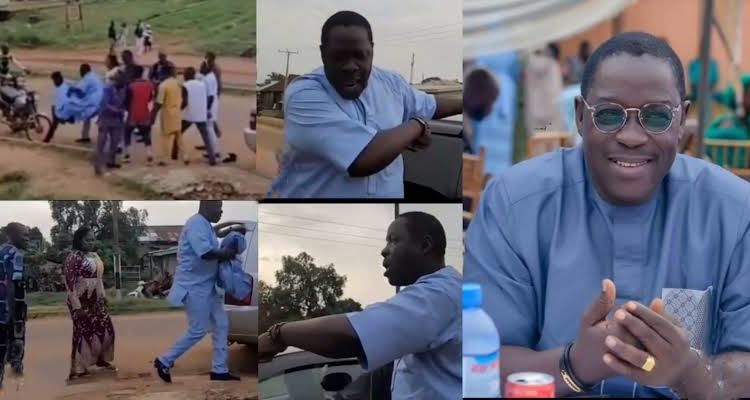 Nollywood actor, Taiwo Hassan also known as Ogogo, engaged in a fight while he was in his hometown in Ilaro, Ogun State.

Due to the viral videos on social media involving him and the unknown men, the actor, via his Instagram page has explained what transpired.

The veteran movie actor who was once a boxer said, he went to his hometown in Ilaro, to inspect a project when some unknown guys walked up to him and demanded money.

He said that although he gave them all the money he had, one of the guys dragged him by his native attire ‘agbada’ while insisting that he wouldn’t leave until he settles them.

This move infuriated the boxer turned movie star and he engaged in a fisticuff with them. However, will clarifying the incident that happened, the actor wrote, “Before bloggers pick this up, let me tell my side of the story and the truth. I was in Ilaro, my hometown, for an inspection of a project, after which some unknown guys walked up to me for the normal appraisals.

“We watch your movie. Give us money. We watched you all through our childhood. All these as an actor, we hear every day. I offered all I had on me and one of them dragged me by my agbada and demanded an amount I couldn’t pay.

“I asked him to leave me and he said “Do your worse” the rest is a story. Please stop harassing actors or entertainers, do you pay anyone for doing your job, No it’s our job too. Accept all we offer when we do. Remember, once a boxer always a boxer”.