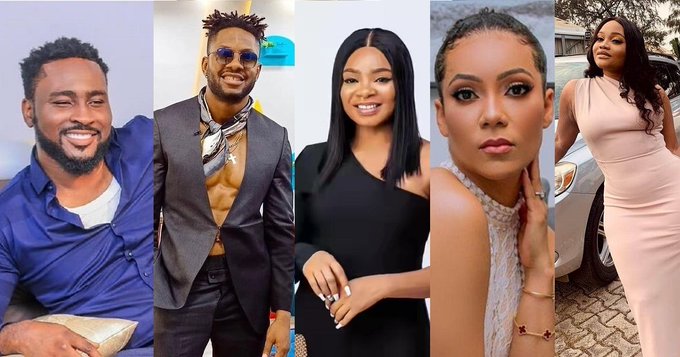 Pere, Maria, Queen, Sammie, Cross, and JMK, have been nominated for eviction in week five of the Big Brother Naija Shine Ya Eye TV reality show

This was announced during the Monday nomination show where each housemate had to nominate two other housemates for possible eviction.

The housemates were summoned into the Diary room by Big Brother this evening and they nominated the housemates they wanted up for eviction for this week.

Since Liquorose is banned from the HOH longue, Saga the Deputy HOH chosed Nini as expected to spend the week with her in the HOH longue

Here’s how all the housemates nominated for the week.

Jackie B – Pere and Angel

The tally eventually had Pere and Peace with the most nominations making them up for eviction this week but can only be saved from eviction on Sunday if they’re saved by their fans by votes.

At least one of the nominated housemates would be evicted in the live show on Sunday.