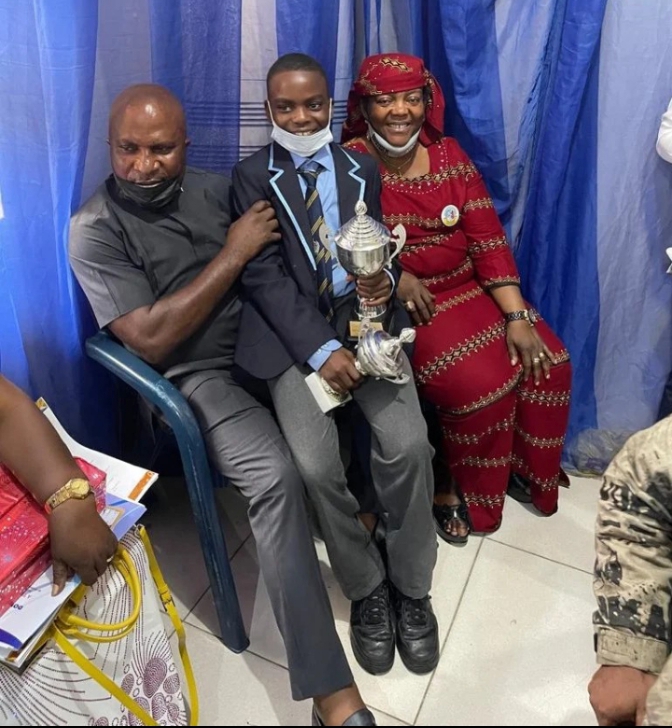 The father of 12-year-old Oromoni jnr that was assaulted at Dowen has reacted to the statement released by Adebisi Layiwola, the principal of the school.

He said how a woman who claims to be a mother comes out to tell such lies. He challenged her to mention those his son played the ball with and also explain why a housemaster wasn’t there with them if at all they played any football.

He explained the degree of pain that was inflicted on his son and how the innocent boy was struggling to live on the hospital bed.

He said he was on an assignment on November 29 when junior opened up on what happened.

The deceased couldn’t open up because of the fear that had been instilled in him by boys.

According to junior, the five boys had barged into his room and put off the lights, they walked towards his bed and beat him up before other students.

The deceased who managed to explain all that happened said he jumped off his hostel bed, got kicked, his waist was matched. They warned other students not to say anything to anyone if they don’t want to be their next victim.

He made all these confessions to his mother who flew in from Warri to be by his bedside. He said he never played any ball, that the boys had told him to say that when asked.

Junior suffered liver enlargement due to congealed blood. It was disclosed that the boy was fed with a chemical substance aside from the beating.

Two out of the five students that were accused have been withdrawn from the school with plans of sending them abroad as soon as possible.

The father in tears said:
“My son suffered. His birthday is December 4. I will celebrate it, I will have a cake baked and I will cut the cake on his behalf. The boys they mentioned were also reported to the school the last term when they bullied Junior and collected all his provisions and clothes. I have two daughters, one of whom earlier graduated. I had to remove the second after the incident. They asked this boy to describe his sister’s private part and this got to us. They put fear in him so much that when you ask him, he won’t say anything, he would only say they will kill me. I considered removing them but had a rethink since his sisters were still there. When the family friend we sent to pick him up since he stays in Lagos saw him, he panicked and said he doubts if it was a football injury. He said the boy couldn’t stand properly because his waist was swollen along with the side of his stomach. His mouth was black. He couldn’t sleep at night. Even when I asked my eldest son who was supposed to make a trip to London, to travel to Lagos and see what was going on, he screamed and told me to come to Lagos immediately. We flew him back to Warri for treatment.”

The father said steps have been taken to unravel the story behind his son’s death, but he won’t mention the steps, because the parents of the five boys are wealthy. But he said the truth will be out soon.