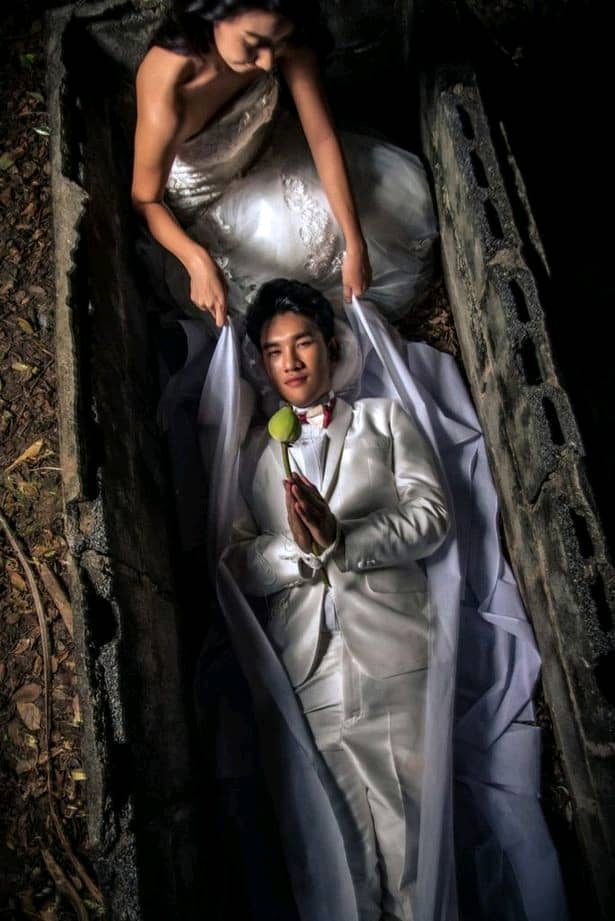 A 32-year-old graphics designer, Nonts Kongchaw, and his partner have caused stirred reactions after they shared photos from their funeral-themed prewedding shoot online.

In the photos the young couple posed in coffins and various scenes in a graveyard. One of the images also showed them leaning against a column tombstone behind a sign that reads, “Marry Me.”

Another photo shows the couple laying down inside a coffin while the bride who donned a long white wedding dress draws a silk covering over the groom who is clutching a bouquet.

The photos stirred tons of reactions from social media users and has been shared over ten thousand times on Facebook.

Reacting to the photos, netizens opine that the concept might have spiritual implications and can probably lead to a curse being placed upon their marital bond.

“Seriously… Things like this have a curse.. If you know how to do it, you have to know how to fix it. Playing with invisible things like this.. It’s not a toy and it’s not a joke .. Otherwise, disaster occurs..”, a Facebook user wrote.

Another user wrote, “Please be warned, this kind of thing has a mystical, everything related to rituals related to death, the end of life, all things are magical and powerful. in all cases, if it is not yet the right time If you want to know more, try asking the undertaker.