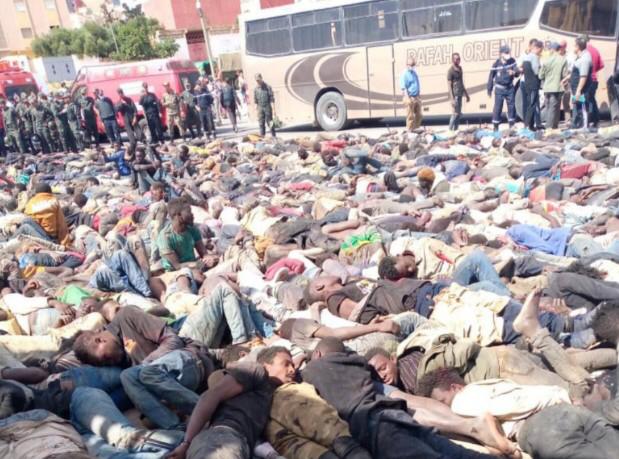 In the early hours of Friday 24 June, there was a massive attempt by several hundred migrants to jump the Melilla fence and cross from the Moroccan side into Spain.

This resulted in the death of 37 people (so far confirmed), according to a local NGO, with 76 wounded, 13 of them seriously.

This incident occurs just a few months after the ratification of the new relations between the Spanish government and the Moroccan dictatorship.

This is the greatest tragedy to occur at this border to date. Witnesses, journalists and videos that documented the event recounted how both the Moroccan gendarmes and members of the police and civil guard charged at and violently assaulted all the migrants who tried to cross the fence.

A striking glimpse of this police intervention was provided by images of the Moroccan gendarmes beating, charging and carrying out immediate deportations with total impunity within the Spanish border.

In the past, collaborations between the police and the gendarmes in this type of operation were common, but this is the first time that the gendarmes have acted within the Spanish border.

The extent of this repression by the security forces caused numerous human avalanches, in which several people lost their lives due to suffocation or being crushed.

In addition, many people fell from the top of the fence, which at some points is 10 meters high.

If there is anything that can produce the same rage and shock as the images of dead and wounded people piled up on the ground, it is the words of Spanish Prime Minister Pedro Sánchez when referring to the events.

The president has hypocritically blamed human trafficking, making allegations about and criminalising migrants who are simply looking for a better future away from war and hunger which, incidentally, is caused by the looting of African countries by European and Chinese multinationals.